Okay, first of all: the obligatory adorableness: 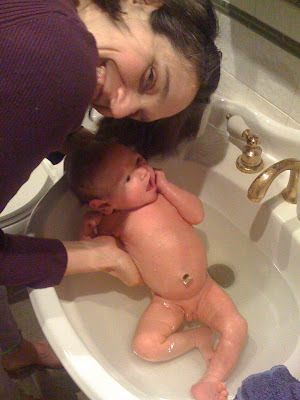 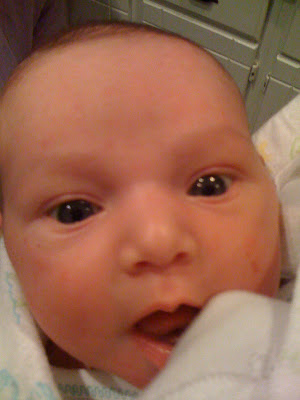 Now that we've got that out of the way: on his blog, Paul Hoover recently sought to engage my July post about New American Writing, the magazine he edits with his wife Maxine Chernoff, in which I made the claim that the writing published there represents the "postmodern establishment." To quote myself, "Hoover and Chernoff's magazine constitutes an establishment insofar as it palpably conserves the tradition of postmodern lyric that occupies, I think, the capacious middle ground between the austerities of Language poetry and the ironic "personal" characteristic of the New York School(s)." Paul's response to my post basically agrees with that statement, and raises the question of what it might mean to pursue avant-garde strategies in the wake of the collapse of the distinction between the "inside" and "outside" of American poetry: the strong antagonism between an academic inside (master signifier: the AWP) and an anti-academic outside (the New Americans, the Langpos) has collapsed almost entirely in just the ten years or so that I've been a publishing poet.

Over at the Poetry Foundation, Reginald Shepherd has raised a remarkable storm of controversy in his efforts to define the bogeyman of the "post-avant," a specter that has long haunted the blogosphere and a term that, depending on who you talk to, originated either in the spirit of parody from the poison pen of Joan Houlihan, or the spirit of sober earnestness from the stone tablets of Ron Silliman. The subsequent dispute between Reginald and his interlocutors (Ange Mlinko bringing the sharpest edge, in every sense, to her comments) seems to be between a view of the post-avant as a "third way" between avant-garde and mainstream, and a view of it merely as a style of our period, with all the flexibilities and fetishizations attributable to a style. I agree with Ange when she argues that to be avant-garde is a political position before it is an aesthetic one: that it assumes a negative, outsider's stance toward aesthetic establishments and institutions. If, as she goes on to claim, there is no longer any meaningful "outside" in American poetry, the avant-garde is emptied of its content and becomes a style at best and a pose at worst: one more chip to be played in the increasingly disorganized game of Texas hold 'em that is our boundaryless poetry present.

So [to paraphrase Ms. Jane Dark] the notion of the post-avant as a "third way" is indeed subject to the same criticism that the political Third Way is open to: that it's really just the "first way" (i.e., hegemony) with an updated sales pitch, Quietude with a human face. Yet from my perspective, the crisis we're a part of now has less to do with the disappearance of the outside than it does with the disappearance of the inside. That is, literary culture (not just poetry!) no longer has a meaningful relation with our culture-in-general, which in itself no longer seems to serve the function of legitimizing political power that it used to do (but it may still have a role in legitimizing markets). Put another way and more locally, many poets associated with the "post-avant" now have tenure track academic jobs; but I would argue such positions no longer constitute a meaningful "inside" because neither American culture nor American poetry center on academia any more, and haven't for quite some time. An endowed chair at Harvard or Penn just ain't what it used to be: the cultural capital accruing to a Bob Perelman or a Jorie Graham is microscopic in comparison with the capital enjoyed by previous generations of poets and profs from Mark Van Doren to Lionel Trilling, or even to Perelman (still "outside") and Graham (very much "inside") as recently as the 1980s. The flip side of this is a tremendous democratization: it's harder than ever to write a book of poems that will make any sort of splash in the larger culture, but it's easier than ever for talented poets, academic and non-academic, to find an audience (if not the audience) via chapbooks, small presses, and the Web.

So it seems to me that poets of every aesthetic stripe save perhaps the most conservative (the ones approved of by Adam Kirsch, say, or the ranks of the poets-laureate) are best described as post-mainstream, because the center of the cultural margin is still the margin. Almost any sort of poetry writing or poetry life counts as countercultural in a manifestly postliterate society. But that doesn't mean we get to reclaim avant-garde status because a literary avant-garde has to attack the literary establishment, and the latter simply doesn't exist any more, at least not in the sense that "establishment" ought to have (i.e., bearing some intrinsic relation to power). This doesn't mean that poets have stopped competing for status and recognition; nor have I resolved, or adequately raised, the question of literary culture's relationship to the marketplace. But it seems clear that the game has changed, and more radically than we've realized, in just the past decade or so; and I'm not at all convinced that what will take the old culture's place will much resemble the field we're all still half-heartedly running up in down in, with the avant-garde guarding one goalpost and the reactionaries guarding the other (while proclaiming loudly that there is, in fact, no game taking place).

What we're left with is style: mere aesthetics. And that's not such a terrible thing, if only because of the enormous freedom it offers poets and readers; and because it throws us back upon what Ron recently said in his response to a Poetry Foundation questionnaire (the simple fact of which tells us that the Foundation can't be what we once thought of as an establishment, nor can Ron be what we once thought of as avant-garde): "Whether you are a new formalist or a slam poet, a visual poet or a language writer, the absolute materiality of the signifier, the physicality of sound and of the graphic letter, is the one secret shared by all poets to which nonreaders of poetry seem literally clueless." Ours is a language art, and whatever else we are likely to become as a species, it seems unlikely that we'll become post-language. So there's room for the new—and perhaps, an outside—after all.
Posted by Unknown at 11:26 AM