THE PLOT: In a bistro in Paris a young woman (A) tells her three girlfriends (B, C, and D) about the affair she had with an American tourist, who returned home promising to write, and hasn’t. It’s been over two weeks; something must have happened to him. (She has just learned she is carrying his child, but she doesn’t tell her friends.) B tells her to call him; C to e-mail him; D to forget all about him. Enter a fat American couple; each of them has a different speech impediment. They order food. The man chokes. A performs the Heimlich maneuver on him, and saves his life.

The bait has been taken by poets, fiction writers, and other weirdos worth your while.
I had hoped to be at the reading in the city featuring Gabe Gudding, Kent Johnson, and Tawrin Baker this evening, but the lure of new fatherhood was too strong. Can you blame me? 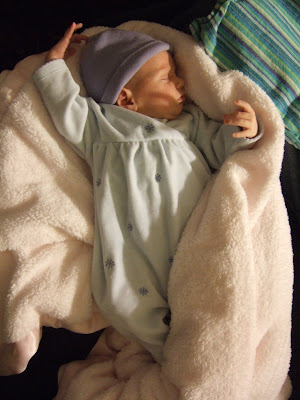 A rather dramatically lit photo that Emily took. Clearly we have a future dancer or conductor on our hands....

I may have more to say about the subject of the last post; I may not. But for now I direct you to my colleague Bob Archambeau's trenchant assessment of the post-avant brouhaha, inspired in part by the generational musings of Ray Bianchi, who succeeds in making me ever more eager to read this.
Posted by Unknown at 9:18 PM