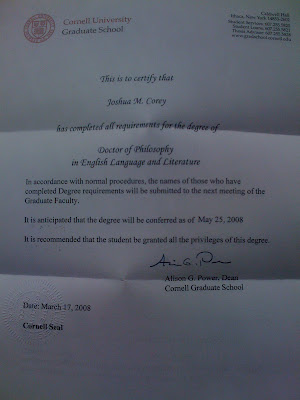 Even now that I'm an actual professor, even though I've been working toward the ultimate goal for almost a decade, I still can't quite believe I've made it through. But as this piece of paper attests, I've finally crossed all the Ts and dotted all the Is. All that remains is to go to Ithaca (hurray!) in May to pick up the more durable piece of paper in the horribly expensive doctoral regalia I'd better hurry up and order. These new identities, so rapidly and recently acquired—professor, father, PhD—sit uneasily upon my shoulders, though I'm probably the only one who thinks so. (Least of all my daughter, currently wrapped up in her sling against my chest, fast asleep.)

About halfway through Moxley's The Middle Room, and I am surprised anew by her commitment to a thoroughly romantic (and Romantic) poetics—or not only or not merely a poetics, but a way of living. It reads like a nineteenth-century memoir of the late twentieth century, if such a thing were possible, dotted as it is with archaic prepositions like betwixt and o'er&#151a testimony to the author's nostalgic passions (a phrase that, like wicked interior spy, recurs frequently throughout the book, and always in italics).

Over at Parsifal Press, Simone dos Anjos has posted a review of the book that recommends it "to those literary persons who take themselves too seriously." It's true that the book is characterized by the dry yet tender irony of the adult Moxley toward her younger self—yet "irony" doesn't seem quite right, because Moxley still seems perfectly capable of stepping back into her younger self's skin, so that only the barest daylight shows between "Jenny's" taste for melodrama and the older poet's frank savorings of that drama. Perhaps it goes hand in hand with her romanticism, but Moxley has always impressed me precisely because she does risk taking herself too seriously, a risk many of us are unwilling to take because it would make us too vulnerable. You need a thick skin, or a lot of arrogance, or most simply the courage to risk being hurt, again and again, to present yourself to the world as a serious person who believes in the significance of his/her own life and work (particularly a poet's life and work, which provide few if any social appurtenances with which to shield oneself). Moxley impresses and disturbs because her courage is coupled to what seems like the thinnest of skins: to spend time in the company of her poetry or her prose is to watch her bleed.

It's a lushly written book, very pleasuarable on a sentence level, once you've gotten used to the archaisms. As an account of one poet's sentimental education it gratifies my curiosity to understand from the inside what it must have been like to come to poetry from the communitarian and experimental stance that Moxley encountered as an undergraduate, and which she naturally took to be the path of the poet—very different from the thoroughly quietudinous education I received at Vassar, where the creative writing students pored over Elizabeth Bishop's drafts of "One Art," sat at the feet of bearded male profs, and felt at best a prickly rivalry with each other, at worst indifference. At least that was my experience—maybe I was sunk too deep in Dungeons & Dragons to partake more actively of Vassar's literary culture, such as it was. The two other poets who were there when I was, Camille Guthrie and Renee Gladman (I knew Camille pretty well; I've never met Renee, that I can recall), did go on to be associated with the avant-garde (Camille's first book, as it happens, is published by Subpress, the publishers of Moxley's memoir), so maybe they found more a more challenging aesthetic and a more involving community (with all the attendant romance, rivalry, and performative opportunities) at Vassar than I did.