For the first time in many years AWP is happening without me, but I don't miss it much. Sadie Gray is the new magnet to align my filings; she's worth all the schmoozing in the world, and much more besides. This morning I said to Emily, "I'll never write a greater poem than her," and that seems self-evidently true. Baby, remember my name indeed: if only she'll remember, what else could I require of fortune and men's eyes? A great reorganization is taking place. 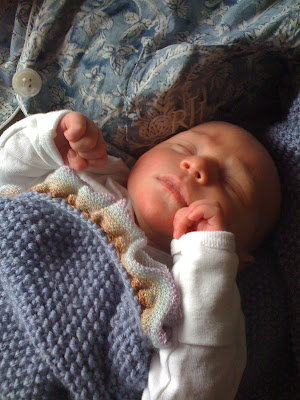 In my younger and more vulnerable years I saw my life as grist for writing, as redeemable only by writing, sometimes in the most literal terms: every day I produced pages was a day I had earned the subsidiary right to exist. I drifted along like a wilted balloon, barely touching the ground, unbearably light: Situations have ended sad / Relationships have all been bad. Gradually I began to take on ballast: institutional support, awakening of intellectual desire, passionate friendships, love, marriage. Now a child completes my awakening to the earth and it's more clear to me than ever that my work and writing exist to serve my life and not the other way around.

Perhaps that bars the door to greatness? Or to unfold the full quotation from Yeats: "The intellect of man is forced to choose perfection of the life, or of the work, and if it take the second must refuse a heavenly mansion, raging in the dark." Not quite so clear as it appears at first glance: the intellect must choose, not the heart or soul; one foregoes a heavenly mansion, not an earthly one. And I think of another Irishman's rueful (or was it triumphant?) claim: "I have put my genius into my life; I have put only my talent into my works." More practically, of course "getting a life" means less time to write; but the real damage, if there is any, is inflicted by the middle path of bourgeois family life, which necessarily restrains you from pursuing the more glamorous extremes (though if the sleep deprivation an infant puts you through doesn't count as a systematic derangement of the senses, I don't know what does). Or most simply, the intense and necessary selfishness of the devoted artist is thwarted by the radical decentering family life requires. Put in evolutionary terms, my species-being now asserts itself over any notions of individuality I may have had: I exist as a vessel for my genes which I must now safeguard in the person of a single nine-pound person. Sadie Gray comes first in all my thinking now--no, that's not accurate--she's prior to thinking, she's a transcendental condition of my most ordinary acts, and my writing consciousness as well. I come toward or go away from her, like the sun, like gravity, whatever else may preoccupy my mind.

Of course the pursuit of immortality, or greatness, or what have you, has always been a mug's game, and all the more so in the field of literature. It seems clearer than ever that the love of books has become an eccentricity, and that literary fiction is now nearly as far from the center of cultural gravity as poetry is. If I were setting out now to forge the uncreated conscience of my race I'd create a series for HBO. But from another perspective the death of the Author (some salt-and-pepper eminence being quizzed by Dick Cavett) is really only the death of certain apparatus of canonicity and distribution: the big publishing houses are now nearly as irrelevant to cultural activity as the record companies have become to music. It's easier than ever to find readers and harder than ever to assign some kind of exchange-value for that readership; and so we write for the thing itself, to be read. Which is as much to say that writing, cultural labor, now exists as a means toward living (not making a living)--and so I have the perhaps inaccurate sense of living a post-literary life in time with my post-literate culture. Post-literary: the death of literature as means to something else. Are new possibilities, new purities of expression now possible?

I kid, of course; or I push it, or exaggerate. The game is still the game, as Daniel Plainview's descendent Marlo says on The Wire (glory of 19th-century television, though a diminished thing this season). People are still scrambling for cultural capital: academia remains the major preserve in which writing serves as a form of accumulation, convertible into prestige which translates directly into dollars (if only it translated into euros!); someone reading this now still dreams of making a splash with the Great American Novel, if not the Great Postmodernist Poem. And there remains the question of who reads us, and how many: does it matter if most of my readers are themselves poets? Is it so inglorious a thing to perhaps occupy the position of the band that launches other bands? So many of us writers keep going because we have this crazy faith in the possibility of being the butterfly in Bali that starts the hurricane in Florida. And so many of us are also teachers who come to work each day hoping to meet the student who will in some way carry our literary passions beyond our own necessary obsolescence.

Which brings me back to my little girl, my throw of the dice that will never abolish oblivion but stands for possibility all the same, and whose relationship with my writing is yet to be discovered, though it's already taking place.
Posted by Unknown at 6:15 PM