Reading Nada and Gary's great epistolary epic Swoon again here at work, and I thought I'd share with you the ten things Nada wants (or wanted) from a relationship:

This is a pretty damn good list. But I wonder if I would put the same things in the same order. "Resonance," however, is deep and mysterious enough to be at the top of anyone's list, I should think.

Incidentally, whatever mystery "Jane Dark" wants to preserve by her pseudonym has been pretty much given away by her. Just click on the "nominally my boss" link over here. But a pseudonym (heteronym?) may still possess the residual value of deferring (differancing?) identity-in-general when it no longer conceals identity-in-particular. Hm.

An addictive read, Swoon. Aside from the happy ending, one thing I like about it is that it takes the form of an actual epistolary dialogue. I love reading writers' letters, but you usually only get to read the Great (Wo)Man's letters and not those of his/her correspondents.

Still in a bit of a post-exam drift. Today I started to read Thoreau's A Week on the Concord and Merrimac Rivers and then put it down again. Two books of poetry that I seem to be perpetually rereading at the moment are E. Tracy Grinnell's music or forgetting and Sally Keith's Design. (My friends Karen and Jerry are visiting Sally in Rochester this weekend, actually). The book I'm reading most attentively (in the conventional beginning-to-end sense) is The Great War and Modern Memory. Fussell's manner is a little irritating at times, a little fusselly (sorry, couldn't resist), a little arch. But it's a must read if you're interested in modernism. I'm struck most by his claim about the intense literariness of the War—how, thanks to the absence of TV and radio, literature and literacy were enjoying an intensity of prestige that had been and has never again been equalled. A sick but unmistakable sense of nostalgia washes over me when I read this. Media is, quite literally, a means of connection. There's a distinctive pleasure to be found in connecting with one's culture, particularly when that culture has produced something you can almost wholeheartedly embrace (for me lately and surprisingly it's been hip-hop: the Black Eyed Peas, Outkast, and the Grey Album--believe the hype). But there's a particular intimacy of connection (and how much of this intimacy derives from its exclusivity?) to that found in print, particularly poetry. I recognize the world of Swoon as being the world I actually live in, though to find oneself outside it contemplating it obviously puts that perspective sous rature. Swoon,, or the Grinnell or Keith books, make up for what they lack in immediacy quite literally: in their mediacy, their particular sensual and intellectual (no. 8) way of conveying weltanschauung, which is ultimately more compelling and necessary to me than the "message" being conveyed.

In other words: just now down the hall from the Bookery, a saxophone player at Moosewood was playing "I Just Called (To Say I Love You)." The only call we ever want to hear, right? But can we hear it when, as now, it comes served between thickest slices of aural cheese? "Only connect," sure&#151but are you willing to accept the charges?
Posted by Unknown at 8:20 PM No comments:

Yesterday I was on an intellectual high, aided and abetted by a very strong, very large cup of Gimme! coffee (really the consistently best coffee I've ever tasted). I decided it was time to stop dodging Derrida. I haven't made a sustained attempt to read him since I was at Montana ("White Mythology," Spurs, and assorted bits and excerpts from Margins of Philosophy). But reading Spivak's wonderful preface to Of Grammatology has helped me realize how much he is in the deep background of everything else I've been thinking since I started grad school; I ignore him at my peril. Right now I'm struck by the resemblance between Adorno's negative dialectics and Derrida's differance; I suspect that many large volumes on this subject have been written and will continue to be written. Naturally I started trying to fit him into my notion of pastoral—is the Virgilian locus amoenus a site of bricolage from which the dream of "engineering" is deferred? I fear I must sound impossibly naive. But still I'm looking forward to reading the whole book. I also devoted part of yesterday to reading Ronald Johnson and forming some ideas for how he fits into my dissertation; in some ways he represents the telos of modernist pastoral as I'm defining it.

But that was yesterday: today I'm a slug. I was up late commenting on student poems and after I got home from teaching found myself unable to do more than read the article about Lyle Lovett in the new New Yorker and futz around gathering the materials for a certain notorious remixing of rapper X with pop group Y. I usually feel guilty about this sort of thing, but damnit, in this case copyright law is standing in the way of art. Now I'm going to bliss out listening while thumbing through Paul Fussell's The Great War and Modern Memory, which somehow seems appropriate enough.
Posted by Unknown at 8:37 PM No comments: 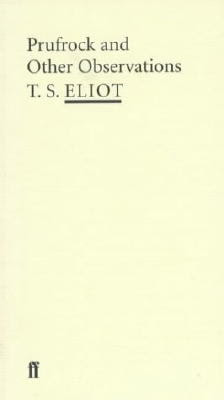 You're Prufrock and Other Observations!

Though you are very short and often overshadowed, your voice is poetic
and lyrical. Dark and brooding, you see the world as a hopeless effort of people trying
to impress other people. Though you make reference to almost everything, you've really
heard enough about Michelangelo. You measure out your life with coffee spoons.

Take the Book Quiz
at the Blue Pyramid.

The mysterious Jane Dark joins the blogroll. I've also decided to push Edwards instead of Kerry. I think the first John is the one the Republicans are really nervous about. And let's face it: in this culture, a long record of almost anything appears to be a liability in electoral politics. It may take one handsome Southern boy (who can at least speak in complete sentences) to defeat another.

I think Bush's gay marriage amendment might backfire on him. Kerry is on the right track when he says it's a distraction from Bush's appalling domestic record. Either candidate just might have a shot if he simply doesn't lie there like a dead fish in the face of the Republican vitriol machine.
Posted by Unknown at 6:22 PM No comments:

Why hasn't anyone ever told me what a terrific magazine Chicago Review is? I picked up the new issue in New York and it seems to be just about everything I've ever wanted in a literary magazine. The poetry is of a very high order: so far I 've read the work by Camille Guthrie*, Ed Roberson, Stefanie Marlis, Mei-Mei Berssenbrugge, Joan Retallack, and Karen Volkman (her sonnet project, which I imagine will be a book one of these days, fills me with wonder and envy). In addition to the poem there's a very moving essay/talk by Michael Palmer, "Poetry and Contingency: Within a Timeless Moment of Barbaric Thought." There's probably no poet of his generation that I admire more than Palmer, and I think a lot of the poetry in this issue is touched by his aesthetic: a profoundly ethical wit rendered in sparsely musical and suggestive language, like headlights flashing through a window to make the bedroom strange. There's also some interesting looking prose by Gerard Roth and Viet Dinh, and a couple of other essays I'm looking forward to reading, particulary Joshua Weiner's "The Apprenticeship of Dr. Williams." There are many reviews, including one of Jennifer Moxley's The Sense Record, a book with which I have become somewhat obsessed. She's one of the rare contemporary poets I'm aware of whose sensibility, whose difficulty, resembles that of John Donne: her muse is not indeterminacy but a rage for the syntactically accurate poetic process. (I'm getting a similar vibe from Elizabeth Willis' more playful Turneresque.) Best of all is the blog-like "Notes and Comments" section at the very end, which includes a brief memoir of the late Stan Brakhage, a review of a Max Beckmann show at the Tate Modern in London, Andrzej Stasiuk's reflections on Poland's membership in the so-called "coalition of the willing," and some charming reports on poetry readings in Chicago by Matthias Regan, John Taggart, Michael Heller, Trevor Joyce, Tom Raworth, Jennifer Walshe, Mark Salerno, and Lisa Jarnot. All this for just six dollars! Sign me up!

* It seems that every couple of years I get in touch with Camille and her husband Duncan Dobbelmann (two very talented poets), then lose touch again. Camille and I once shared an Academy of American Poets prize back when were at Vassar together. If by chance you have her or Duncan's e-mail address, would you please let me know?
Posted by Unknown at 8:26 PM No comments:

Back from NYC and New Jersey, where I gave readngs at the Ear Inn and the Morristown Unitarian Fellowship, where my mother was once a member and my dad and stepmother still are. I feel more than a little ambivalent about Unitarianism, given that I identify as a (secular) Jew, but it was a very important place in her life and it felt right to read there. Some of the women who had been part of a poetry group she'd led were there for the reading, and they said sweet, moving things afterward—one described my mother as a "poetry shaman," which sounds about right. Sometimes I imagine that my life as a poet is my mother's afterlife. In one sense at least, that's literally true.