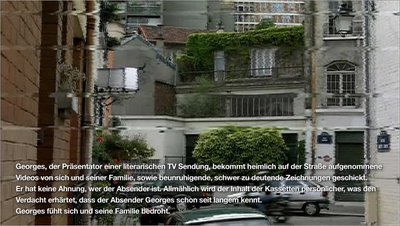 Films don't come much more unsettling than Michael Haneke's Caché, which I took in at Cornell Cinema (this is starting to become a habit) last night before dropping in on the English department's annual meet-n-greet party at the A.D. White House. It's a film about complicity: the individual's complicity with history and with the political policies of his nation, and the complicity of the viewer with what happens on screen. We never learn who's making the mysterious videotapes that push Georges and Anna off their complacent bobo perch, though the infamous closing shot suggests a mysterious collusion between their son Pierrot, and the son of the unfortunate Majid, an Algerian orphan whom Georges spitefully disenfranchised when they were both children. This mystery remains a provocation and irritant that lingers after the film has ended, mimetic of the bad conscience that Georges' private-eye antics fail to solve, and which can ultimately only be assuaged by sleeping pills.

When I see a film which privileges its technique and formal qualities over the usual Hollywood values, my thoughts turn to poetry, as with Days of Heaven (another film with class privilege on its mind) last week. Whereas Malick's film had the lushness and interiority of lyric, Haneke's self-conscious deployment of digital video, which turns the camera back on its habitual wielders far more effectively than "reality TV" does, makes me think of more those austere modes of modernism in which personal history and more global histories are made to interact so the reader can trace his or her own habits of constructing them. The example that comes to mind (and which affectively mimics both Haneke's coolness and his moral disgust) is Barrett Watten's Bad History, which among other things is an examination of the bankruptcy and exhaustion of the generation of '68 and of what is coming increasingly to look like an aberrant moment of spiritual expansion that has, like Majid's rooster, had its head chopped off and whose twitches are decreasingly lifelike. I also think of Bruce Andrews and of flarf—or rather of a poetry that could somehow succeed in re-presenting the word salad of our lives back to us in all its unalienated dismajesty, so that we recognized the world we have made. In other words, it's too easy to dismiss flarf as Other, as not our language, as something we personally privileged readers have no responsibility for. But maybe that's not flarf's fault, or art's fault&#151even watching Caché I found myself agreeing somewhat with Georges that he couldn't be blamed for something he did when he was six. But then that's the problem of responsibility: we've all been trained not to see ourselves as part of history, or to recognize the ways in which we've benefited from the horrors of primitive accumulation. (My great-great grandfather might have been dodging Cossacks in Russia, but that doesn't mean I haven't indirectly benefitied from the wealth extracted from American slave labor, for example.) Art falls short of moral instruction: it can only prick your conscience if you have one. Far from being a shortcoming of art, this points toward the failure of an education system and a culture which ruthlessly exports all "values" into the nuclear domestic heterosexual family. The aesthetic does include and require the ethical, but through the back door. What Haneke's film does, like Watten's poem, is show us how rotten the facade of the house is.
Posted by Unknown at 9:37 AM No comments:

Fewer than three weeks before the wedding, a little more than two weeks before the MLA Job Information List opens for business, one day before my first class teaching Shakespeare. Instead of planning for any of these, I am rearranging a poetry manuscript. Over at right under "Poetry" I've listed some poems under the title, The Nature Theater of Oklahoma, in my opinion one of the best titles I've ever stolen (it comes from the last chapter of Kafka's Amerika, aka The Man Who Disappeared). In spite of this the manuscript's been rejected time and again by, well, almost everybody. This might have something to do with the current trend in poetry publishing, the concept book: a mere "collection" of poems isn't as sexy as a book that has some kind of narrative or metanarrative hovering about it. Akin to this is the formally unified book, in which a device, constraint, or composition method creates a kind of (wo)man on the flying trapeze effect that publishers and readers alike find compelling. I've written both kinds of manuscript, arguably at the same time. But Nature Theater doesn't fit into either of those categories. While there are definitely recurring themes and moods, and to me at least the book does tell something of a "story" about my engagement with my Jewish-Modernist heroes, the poems themselves are various in subject matter, tone, form, etc. I think there still ought to be a place for the collection and so I've resisted trying to turn Nature Theater into a hardcore concept book—or more to the point, the poems have resisted me. But that does leave the problem of arrangement. I've tried putting the poems in thematically consistent sections, and I've tried dividing the book into two sections that seem to somehow oppose each or complement each other, and I've tried creating a continuous stream in which elements that really recur by obsession appear to recur by design. I've never been satisfied with any of them, and so maybe I shouldn't be surprised that the manuscript hasn't yet satisfied an editor.

This weekend I came up with a new arrangement that, at least for the moment, both satisfies and excites me, and restores the flow of the book's energy (when a manuscript hangs around for a long time it can get stale in the writer's mind, even if individual poems out of context still seem fresh and urgent): alphabetical order. It may seem like a cop-out—Ron for one has complained about magazines that publish their poets in alphabetical order, so as to shirk making editorial decisions about juxtaposition and conjunction. But surrendering to a constraint, even a simple one, has given my work a shot in the arm in the past, and I think it's happening again. In alphabetical order the poems interact in ways that I didn't force or control, and the conversation between them is far livelier than anything I've tried previously. Plus that quality of obsession that I mentioned earlier is, I think, more on the surface: more nerves are exposed. And the old poems are ventilated in a way that makes room for new ones: I've found a home for many of the poems I've written over the last two years (basically, post Severance Songs) here, and they engage playfully and provokingly with the older stuff.

Whether or not the new arrangement is pleasing to publishers, I hope it will please me enough to help me move on to something truly new. It can be hard to have an old project hanging over your head for years and years: hard to see past or under or through it.
Posted by Unknown at 6:12 PM No comments:

- What can I say about the experience of seeing Snakes on a Plane? A dramatic example of the power of low expectations: we were thoroughly entertained.

- Aaron has the word on how our Friday reading went, if you're curious.

- Also, I'd belatedly like to acknowledge poet Sina Queyras' short review of Compostition Marble, which she picked up passing through Ithaca while I was in Montana. Thanks for the kind words, Sina!
Posted by Unknown at 5:33 PM No comments: 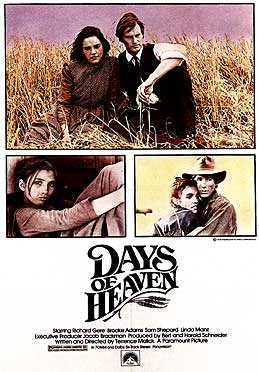