In one of the odder choices of entertainment that I could have made post-election, I went downtown this past Wednesday to see Sean Graney's ferocious production of the play I wrote my master's thesis on, The Troublesome Reign and Lamentable Death of Edward II, King of England, with the Tragical Fall of Proud Mortimer. I've seen one other production of the play in San Francisco, a more conventional staging that emphasized its homoeroticism at the expense of other qualities, and in fairly blatant ways (the first scene finds Piers Gaveston cavorting on a gigantic bed with half-a-dozen other naked men). Graney's production emphasizes the sheer dreadfulness of the story: a weak, vain king's passion for a French commoner destroys him and everyone around him. But he tells the story with a kind of black joie de vivre: a spirit emphasized by the gleeful intensity of the actors with whom the audience interacts very closely, for the play is done "promenade" style. That is, most of the audience is right there on the "stage" with the actors, and we moved or are moved about to follow the action from corner to corner. The mood was set from the very beginning, as a kind of club beat pounded while audience and actors shmoozed under the lazy eyes of King Edward, watching from his throne: 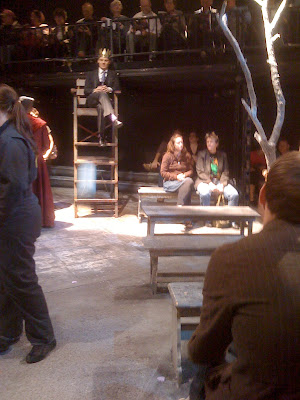 At one end of the floor, where stage center would be in a more conventionally blocked piece, was the arresting image of a heap of broken images—sorry, chairs: 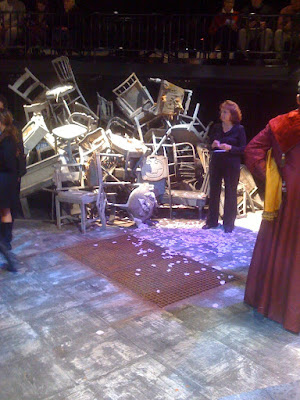 Most ominous was the grisly bathroom to the audience's left as we entered the space: the room into which, one after the other, the play's principal characters are led to be executed (with of course the singular and "fundamental" exception of the gruesome onstage murder of the king himself—the murdered played, as was the case in the San Francisco production, by the same actor who had been Edward's lover earlier): 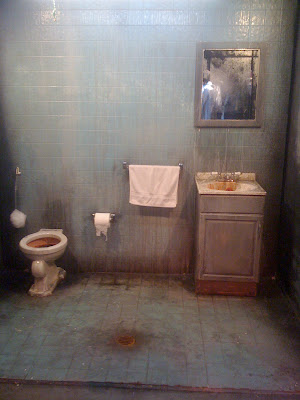 Out of the mob of actors and audience order of a sort does emerge once the play gets going. Graney cuts a lot of Marlowe's text, inserts a number of anachronisms, and unbalances the balance suggested by Marlowe's long title: in spite of his childishness and spitefulness, our sympathies are engaged by the fey, hapless Edward much more than they are by the thuggish, homophobic Mortimer. One ought to feel, I think, a bit more strongly how Edward's distraction has put the entire kingdom at risk: Mortimer ought to emerge as a thug, driven to unspeakable evil by noble motives, if the play's design of darkness is to properly appall. But it was cracking good theater nonetheless. One element I liked was how, after each character's death, he re-emerged bloody from the bloody bathroom to be led offstage by a hideous masked Death ringing a bell. At the play's conclusion, young Edward III mourns his father and one of his attendants is a figure wearing a similar mask, though smaller and daintier. As the last line rings out, this figure whips off his mask to reveal the face of the murdered king. And so Edward II's identity with death is made clear.