If you haven't already read them, check out Kasey's incisive critique of the new Sarabande anthology and Steve Evans' ongoing investigation of the conservative backlash driving powerful forces in the poetics and politics of our era.

As far as the anthology goes, I'm reserving a quantity of judgment, since I haven't actually read the thing, and it contains the work of many, many poets whose writing I admire. But I think Kasey's analysis of the title, the editors' statement, the cover, and the overall packaging/positioning of the book is brilliant. The single most practical insight I'm taking from his post, to file away for any future anthology editing I myself might attempt, is the importance of not letting consensus (between oneself and any partner editors, between oneself and the critical establishment) be the sole order of the day. It's the exact same affliction that can turn a poetry workshop—that supposed refuge for creativity—to become an enforcer of conformity. It's a structural problem that good intentions alone will never fully overcome.

I do think there's a place for anthologies such as this, organized along age or whatnot, as a means of introducing contemporary, living poetry to people who might not otherwise know where to start. At the same time, such enterprises will always have a whiff of the textbook, which is why I think in any future poetry classes I teach there can be no substitute for having the students read current books, journals, and webzines.

Thanks to all who have expressed their good wishes about my engagement. It's very strange how rapidly such a thing turns from a celebration of love to an elaborate exercise in party planning: a vocation I'd heretofore had very little interest in. Wish us luck.

Going to the Chuppah 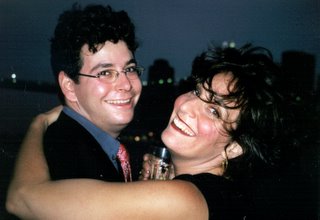 Emily and I are engaged! We couldn't be happier.

Thinking about a September wedding.

This blog, like Trogdor, turns three years old this month, and will have its 200,000th visitor sometime in the next week. Thanks to all for your interest and support.

But THAT's not news. BIG news is on its way—watch this space....

Posted by Unknown at 3:11 PM No comments:

Finished Neal Stephenson's Baroque Cycle this morning: a remarkable read. It's about nothing less than the birth of modernity, and shrewdly intermingles plotlines about the rise of the modern banking and currency systems (Ezra Pound would've been fascinated, or maybe just outraged) with the birth of the new science as personified by Isaac Newton and Gottfried Wilhelm Leibniz (who both appear as vivid characters in the book); Newton, of course, unifies both major plot strands as both author of Principia Mathematica and as Master of the Mint, first under Queen Anne and later under the Hanovers. Stephenson puts the reader in the position of rooting for the advance of Protestantism, Whiggism, empiricism, the free market; and against Catholicism, Toryism, alchemy, and feudalism. At the same time there are some cautionary notes: one character's belief that England's choice is between slavery or industrialization leads him to wonder if the outcome of the latter will necessarily be wholly good, while some of the villains&#151a Tory Lord, a Jesuit priest—get pretty good speeches about how they feel bound to resist the new "System of the World" in which values are produced rather than inherited. It has its flaws, among the most serious of which are the female characters, who behave in frankly unbelievable ways; geek-boy fantasies all. But I was very entertained. The whole thing is apparently a massive prequel to Stephenson's Cryptonomicon, which I am now eager to read. Also on my list: George R.R. Martin's A _____ of _____ fantasy series, which comes highly recommended by Mr. Aaron Tieger, among others.

A few new links at right, including an experimental webzine new to me: zafusy. In honor of Zukofsky's birthday(s), I'm pleased to point to "Zukofsky's A - 23/ a start at an antonymical transliteration" by Stephen Vincent: a brilliant topsy-turvy sort of close reading. Here's the original for comparison purposes:

An unforeseen delight a round
beginning ardent; to end blest
presence less than nothing thrives:
a world worn in whose
happiest reins preempt their histories

which cannot help or hurt
a foreseen curve where many
loci would dispose and and's
compound creature and creature together.
Each lamp casts its shadow