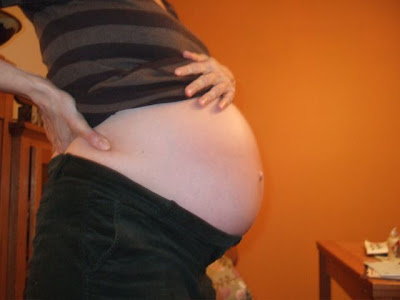 Thirty-two weeks and counting.
Posted by Unknown at 10:59 PM No comments:

What little time I now have for poetry—reading and writing it—I find on the commuter train, a new textural dimension of my life. Every weekday morning (except for Mondays, when I sometimes drive) I rise in the gradually increasing cold (which offers a kind of spurious relief from my fears of global warming) and stand on the platform at Main and Chicago Streets in Evanston, facing the sun that rises on my right shoulder. The shock of the urban is still with me after three months here, though neither Evanston nor Chicago have anywhere near the level of street intensity that I associate with the ur-city of my childhood, New York. Still it's a discombulation and a rush to find myself jostling with the other reverse commuters (outbound in the morning, inbound at night) onto the sleek silver Metra train, to find a seat (I prefer the upper level, solus, facing the direction of travel), settle in with my briefcase on my lap, and slip a slim volume out of it to read until the Lake Forest stop, thirty-five minutes later. The inside of the train is quiet in the morning, except for the occasional hissing tenor of someone's earphones or the conductor calling, "New riders, up top!" Evening trains are another story: crammed full of people talking loudly to each other or into their cellphones, I find it easier to concentrate on fiction, generally some novel I've borrowed from the little lending rack that the Lake Forest Public Library keeps thoughtfully stacked inside the train station there. Mostly it's thrillers and romances, but last month I grabbed a copy of Robertson Davies' The Manticore and was persuaded enough by its Jungo-Canadian oddity to reread the whole Deptford trilogy. This week it was Ernest Gaines' A Lesson Before Dying: heavy-handed and leaden in its prose but still utterly affecting in its portrait of African-American life in 1940s Louisiana. I've attempted more ambitious prose on the train—I'm finally reading Bolano's The Savage Detectives, and I was amused the other morning to see a buttoned-up buisnessman reading it while waiting on the opposite platform, Chicago-bound&#151but as a hardcover it's not an ideal commuter's volume.

(As content perhaps it's another story: the novel depicts innumerable picaresque wanderings and encounters, yet never suspends for a moment the atmosphere of doom and fate that hangs over characters who can only play at autonomy. They're all riding the twentieth century Latin American train, whether in Mexico City or Barcelona or Paris, and they can't get off.)

At any rate I've had time for some poetry: the new issues of Chicago Review and Xantippe, and now a couple of books I've long meant to get to: Kimberly Lyons' Saline and Bradley Paul's The Obvious. I've sung the praises of CR often enough; here I'll just say that I was particularly moved and excited by the continuation of C.D. Wright's "Rising, Falling, Hovering"; the wholly unexpected Book V of Ronald Johnson's Radi Os; Georges Perec's still-relevant call "For a Realist Literature"; and Allen Grossman's pervesely elegant "On Communicative Difficulty in General and 'Difficult' Poetry in Particular: The Example of Hart Crane's 'The Broken Tower'" (I aspire to somehow unite the concerns of Perec and Grossman in my own writing). The new Xantippe demonstrates Kristen Hanlon's almost pitch-perfect editorial ear: it's a splendid mash-up of postmodern lyric and antilyric. Standouts in the first camp: Julie Carr's "(Equivocal)," Karla Kelsey's "As Fire Unto Fire," Sharon Lynn Osmond's "Door to the River" (I would gladly use this poem the next time I was trying to teach the concept of ekphrasis), and Sandra Miller's "Ad Halcyon"; the anti-lyricists of note are Jasper Bernes (with several poems that appear in Starsdown), Tanya Larkin's "Market Day" and "Villa Maria," Kasey Mohammed's disconcerting "The Poordom" (successful example of the kind of poem in which a coinage or abstraction is made to bear increasingly heavy fardels of metaphorical weight), and Rodney Koeneke's "Eerie Wampum" and "Larry's House of Brakes" (okay, that last one has a big lyric push inside it: "a heroic and enormous effort to nudge the myth forward").

Also of note in the new Xantippe: excerpts from Lisa Jarnot's forthcoming Robert Duncan biography, and a mess of book reviews, many of which I'm happy to see are of books more than two years old but which nevertheless deserve attention: the Lyons book (that's why I took it off the shelf), Brenda Iijima's Around Sea (I'd like to reread that now that my head's flush with Thoreau), Rachel Zucker's The Last Clear Narrative (might give me a little insight into the experiential territory of pregnancy and motherhood), and Dan Bouchard's Some Mountains Removed (in which the reviewer, India Radfar, surprisingly and usefully compares Bouchard's versions of pastoral with Bernadette Mayer's).