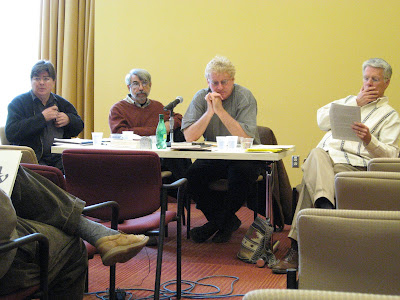 "Between Primitive Accumulation and the New Enclosures" took place at Cornell this past weekend and featured the gentlemen above (Silvia Federici was unable to attend) thinking out loud about what many call globalization but what they call, following a concept invented in the early 1990s by the Midnight Notes Collective (of which Caffentzis and Linebaugh are charter members), "the new enclosures": the rampantly successful efforts of global capital to privatize "the commons," that is, property held in common by one or more communities. Wikipedia defines "enclosure" as "the process of conversion of common land to private ownership. Historically, enclosure is primarily associated with the privatization of land in England from the 12th to 19th centuries." "New enclosures" don't stop at land, but refer to what Iain Boal calls in the title of a forthcoming book "The Long Theft" of oil, the airwaves, intellectual property, and perhaps most fundamentally human labor (slavery was and is enclosure in its rawest form). The work of enclosure goes hand in hand with the creation of scarcity: it's practically common sense to realize that there's more than enough food produced to feed everyone on the planet, and yet for "economic reasons" that most of us poorly understand, food is not permitted to flow to the neediest but must be turned to profit and loss. Enclosure is also crucial to generating the surplus labor that capitalism demands: people in Africa, for example, who get pushed off of their subsistence farms (so that cash crops can be grown according to the "structural adjustments" dictated by the World Bank and IMF) are then forced to join (or try to join: there are miserable millions who cannot even get so far) the international labor market. Those with means of livelihood outside of the labor market pose a threat to that market, if only for the obvious reason that someone with a means of survival other than the wage can go on strike for longer than someone who lacks such means.

I was drawn to the conference primarily to hear Iain Boal, one of the members of the Retort group and one of the authors of Afflicted Powers: Capital and Spectacle in a New Age of War, which made a forceful impression on me back in 2005 (you can read the first essay from the book here). The book remains the most acute synthesis of the post-9/11 situation from a left perspective that I've encountered: a Debordian reading of the attacks, our responses to them, and to the ways in which political, cultural, and even military action are now mediated through/in the society of the spectacle. It was interesting to witness the conversation between Boal and the others; Caffentzis (who was the primary speaker at the morning session, devoted to Africa) and Linebaugh have a more traditionally Marxist view of the situation&#151as Linebaugh said, "I study Afflicted Powers looking for the class struggle and I do not find it." This was something that Boal said would be partially rectified in a missing chapter of the book, unready at press time (the book was published on Election Day 2004) that I gathered would eventually see the light of day, but Linebaugh's comment underscored the ideological differences among these men who were nevertheless unselfconscious users of the word "comrade": as Boal said, "The analysis of enclosure pushes one into the black tent" of anarchism, whereas Linebaugh and Caffentzis are still marching under the red banner of Marxism. But it was agreed in the general discussion that the concept of enclosure is actually enormously useful because it doesn't actually push one into any sort of tent, but is a mode of analysis useful to reds, blacks, and greens as well.

As a student of pastoral I was interested in hearing a green voice regarding the concept of the commons, but such was present at the panel only in its absence. The original "New Enclosures" essay that Midnight Notes published in 1990 (available at their site or from the conference site) is critical of the Green movement for its essential political conservatism after the waning of the anti-nuclear movement:

Ecologists in the Reagan period returned to the self-righteous ideology of "natural consciousness," morality of "good will" and a practice of "recycling" and "stewardship" of the 1970s. This movement has all the markings of Marx and Engels' petty producers' thought and manners writ large. Even the etymology of its name has echoes of the ancient Greek aristocrat's "aikos" or "hearth and home." But just as the word "economy" surreptitiously introduces into the capitalist factory the rural patriarchal relations of father-wife-child-slave, so too "ecology" presumes that the earth is an "aikos" to be well managed instead of the terrain of global class struggle. For proletarians might be natives of the earth but we have no home here. (331)

Natives without homes: I think as I so often do of the protagonists of Virgils' First Eclogue, Meliboeus and Tityrus, whose hold on their "native," idyllic land is so precarious, subject to the whims of Rome and the weapons of soldiers. But I wonder too if Midnight Notes should be so confident about the desirability of transforming the earth into the battlefield for class struggle; I think of Michel Serres' crucial insight in The Natural Contract (published as Le Contrat Naturel in France the same year as "The New Enclosures") that the earth is not merely the background of human struggles but a third party implicitly excluded and subjugated by the combatants, who do not even have the minimal contract of war (expressed in the question, "Who will win?") between themselves and the earth that suffers from the combat and eventually retaliates against the combatants. I agree that thinking of the environment in terms of "management" is problematic; but I would rather see a left ecology movement that enlisted the environment as, in effect, one of the proletarians rather than sticking to the traditional Marxist view of nature as the "non-organic" object of human manipulation. 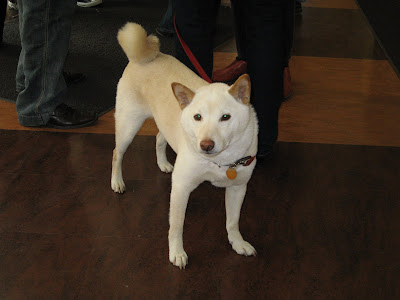