Writing with the Left Hand

Emily and Sadie are in Ithaca for a week. Solitude like this is luxurious and lonely in nearly equal measure. With my normal social identity in abeyance, and not thinking too much about teaching either, a writerly comportment overtakes me that I remember from my single days. It takes the form of looking for clues: haunting bookstores, reading snippets from several books at once, paging through old notebooks. Trying to find my own secret, like money I myself have stashed between pages.

Gradually I come to believe that poetry and fiction can coexist in me, as a reader and as a writer. A kind of ambidexterity might be possible, but I think poetry will always be for my right hand, an instinctive mode of making text. With fiction I have to trick myself into thinking it's poetry--or critical writing, which through long training has come to seem the second nature to poetry's first.

Looking primarily beyond the American scene for my clues to fiction: Beckett, Borges, and of course Bolaño. At Powells this morning I added Juan Goytisolo to that list; previously I've only read his remarkable and piercing State of Siege, but I was entranced by a few minutes with a copy that I found of The Garden of Secrets and bought it. But I also picked up Lynne Tillman's American Genius: A comedy and also Lydia Davis' Varieties of Disturbance (though what I really want is Samuel Johnson Is Indignant, just for the title). I also bought an old Mark Rudman book, By Contraries, and a pristine copy of the Sun & Moon edition of Clark Coolidge's Own Face. Four prose, two poetry: that accurately represents the proportion of my own thought just now, two to one.

But that one! The steady bassline.

This morning on Sound Opinions they were talking about literary rock songs and played one of my favorites while I was browsing at Powells: Blur's "Parklife." "I get up when I want except on Wednesdays, when I get rudely awakened by the dustman."

The dustman. Those Brits. What a way with the language.

Also yesterday picked up for the first time ever a copy of Zoetrope: All-Story, the issue devoted to Latin American fiction. There's something about the Latin American literary imagination that hugely appeals to me right now. Maybe it's just that poets are still of cultural consequence in places like Mexico and Chile. Maybe it's the magic realism thing, the open door to what Kundera calls the oneiric, a necessary component of the novel of existential investigation. I'm also looking for short stories that will upset my expectations of that genre, because that's the form in which I've most often encountered fiction in recent years in places like Harpers and The New Yorker (but also in the occasional "mainstream" lit mag, something like The Kenyon Review), which is above all the fiction that I railed against in my earlier posts. Because short stories, if they're not first and last concerned with "story" in the bourgeois sense those stories tend to be (i.e., preoccupied by the destiny of some more-or-less middle class character dealing with largely private sorrows), can be remarkable, as my reacquaintance with Borges is teaching me.

I blame Joyce, actually, for this prejudice, because his fiction seems to represent a kind of Virgilian progress from apprentice work toward epic. And Dubliners, as perfect as those stories are, have become and remain the prototype of the realistic story, a genre Joyce abandoned. In so doing, he led me into a category error, confusing the limitations of the short story with the limitations of realism. I've let myself be pent in by imaginary boundaries.

Or take this example: one of my students in the senior creative writing class includes both short fiction and poems in her portfolio-in-progress. The prose pieces are remarkable for their compression (which I can't help but think of as a primarily poetic quality), their acuity of observation, and above all for the multiple voices they include, voices with the tang of living speech (she's very adept, this student, at indirect discourse, a mode that fascinates me). Her poems, by contrast, are workmanlike, a little obvious, and rather dull. The epiphany this led me to, in class, was that her stories seem alive because they are fundamentally heteroglossic, whereas in the poems she writes with a unitary voice; it's textbook Bakhtin. Of course poems don't have to be monoglossic, but I'm starting to think that Bakhtin was correct to say that such is their tendency.

My poems don't really resist that tendency: I'm not adept at changing voices and registers mid-line the way Ashbery can. But I will write sections or poems in series that make use of multiple voices, and of course I'm always fundamentally aware of the performative nature of voicing in poems: it's never a naive "me" that's speaking. Still, there's no question but that I'm feeling myself drawn back to fiction for its richer possibilities in the manufacture and mixing of what Kundera calls "experimental selves" but which I might as well call "experimental voices." 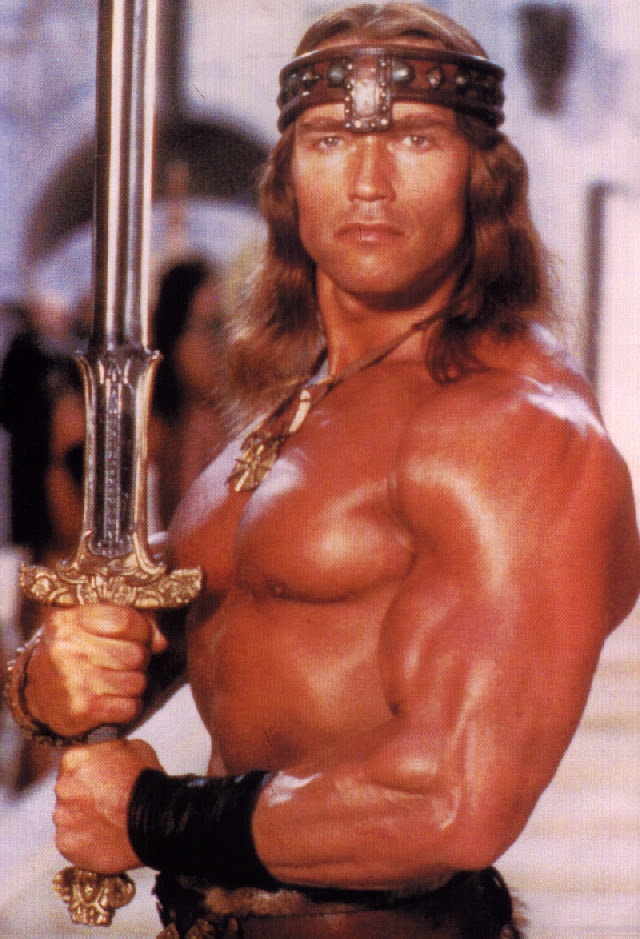 Celebrating my temporary bachelorhood tonight with a couple of friends and a screening of Conan the Barbarian. Why ask why.

It's a rich and confusing time.
Posted by Unknown at 4:20 PM