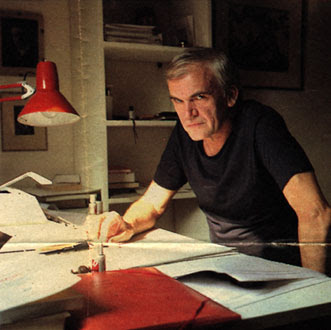 So I'm installing some new bookcases and moving things around and finally beginning to establish some kind of flow to my library, which up to now has been scattered all over the house: fiction upstairs, poetry downstairs, theory books here and there, unclassifiable books all over the place. And one of the books on top of a pile I'm trudging with is Milan Kundera's The Art of the Novel, a book I read with perfect incomprehension back in my early twenties when I was under the malign combined influence of James Joyce and Raymond Carver (like tomato juice in breakfast cereal). So I opened it, and it turns out that Kundera said much of what I've been struggling to articulate recently much more clearly and eloquently. Take, for example, my complaint about the boring mechanics of fiction in that first post. In an interview that I think originated in The Paris Review, Kundera presents that point as "the will to divest," in an excursus about the Czech composer Leos Janacek:

You know, any musical composition involves a good deal of purely technical activity: exposition of a theme, development, variations, polyphonic work that is frequently quite mechanical, filling in the orchestration, transitions, and so on. These days music can be composed by computer, but there was always a kind of computer present in composers' heads: in a pinch, they could write a sonata without a single original idea, simply by following "cybernetically" the rules of composition. Janacek's imperative was: Destroy the "computer"! Harsh juxtapositions instead of transitions, repetition instead of variation, and always head straight for the heart of things: only the note that says something essential has the right to exist. Roughly the same idea applies to the novel: It too is weighed down by "technique," by the conventions that do the author's work for him: present a character, describe a milieu, bring the action into a historical situation, fill time in the characters' lives with superfluous episodes; each shift of scene calls for new exposition, description, explanation. My own imperative is "Janacekian": to rid the novel of the automatism of novelistic technique, of novelistic verbalism; to make it dense. (72 - 73)

And this is true for poetry too, of course: the automatism of technique is a risk run by any artist in any genre. What's great about discovering Kundera now is how he brings not just well-tuned grumbling but a positive theory of the novel that opposes that automatism. As I read on, I began to think that there must be somewhere in Roberto Bolaño's library a much-annotated and dog-eared copy of this book, because Kundera's theory of how the novel operates and what its aims are reminds me of nothing so intensely in my recent experience as 2666. Speaking of a novel by Hermann Broch called The Sleepwalkers, Kundera explains that it's in five sections, each of which is in a different genre, and that they are unified not by characters but only by theme. But this isn't quite enough to achieve the "polyphonic" novel that Kundera is aiming at (he's certainly read his Bakhtin), because Kundera demands that the individual "voices" that each section represent be equal—that there be no hierarchy among them, which in Broch he says there is. He calls this "counterpoint," as befits his musical background. Now this corresponds to another frustration I've often felt with modern fiction and film, which is the overweening tendency to center a narrative on a single character to the point where every other character in the story exists only to do something or teaching something to the main character. An egregious and over-the-top example would be a movie like Jerry Maguire, in which every character and scene is oriented toward producing some measure of enlightenment and self-knowledge in the titular character. As a result of my distaste for this egoism, I've long favored ensemble films and TV shows (like Big Love, the season finale of which is happening tonight, and the TiVo is ready to go). Novels don't fall into this trap quite as often, but short stories frequently do, and in most every creative writing textbook I've read the writer patiently explains how the main character has to be in some way changed by the experience of the story, but the other characters, major or minor, do not—they are catalysts for the hero's experience. I find the repetition and perpetuation of this model of storytelling to be wearisome and unattractive. More compelling—though it risks aridity, not to mention pretentiousness—is Kundera's belief that a novel ought to center on a "theme," which he defines quite succinctly as "an existential inquiry," as novels themselves are investigations of Being. That theme, that mode of Being&#151captured perhaps too schematically in the titles of Kundera's French novels (Immortality, Slowness, Identity, Ignorance) is the "hero" of a Kunderan novel (though he wouldn't use that term), as significant as the fundamental "unity of action" that Kundera also deems a novelistic requirement.

Kundera's theory of the novel has other major touchstones that I find attractive: his (also seemingly Bakthinian) conviction that the novel can never simply reproduce the author's attitudes, political or otherwise, and that this is a limitation (or liberation) intrinsic to the form: "Outside the novel, we're in the realm of affirmation: everyone is sure of his statements: the politician, the philosopher, the concierge. Within the universe of the novel, however, no one affirms: it is the realm of play and hypothesis" (78). And built into his notion of "radical divestment" is a rejection of verisimilitude for verisimulitude's sake, and an invitation into the novel of the discourses of dream (oneiric narrative) and essay (philosophy). As Kundera remarks more than once, there's no intrinsic reason for the European novel to have developed as it has; the possibilities inaugurated by a Tristram Shandy could have made it a more various creature, rather than simply going into hibernation until postmodernism came along.

Can, does, American fiction learn from Kundera's poetics? Stumbling on The Art of the Novel has seemingly confirmed an intuition I've been under the sway of for many weeks, which is that I need to look to Europe, to Latin America, perhaps to Asia for inspiration and ideas about fiction, but that the field of Anglo-American fiction for now is lying fallow and has little to offer me. At a time like this in my creative life I just a few touchstones to guide and reassure me as I stumble around in the dark; I need to disconnect from chatter and paranoia and market-chasing nonsense. Kundera seems to offer one such touchstone, though I have little interest in imitating or taking cues from his actual fiction, and whose oracular tone (in his fiction and his nonfiction) sometimes rubs against the grain of my American ear.

-------------------------
* Just poking around on the Web I found this article by Kris Saknussemm, who sagely advises would-be novelists to "not spend years experimenting with different forms of writing and various intellectual follies" and unabashedly urges writers to write with marketing first in mind: "In what section of a bookstore or retailer’s website will your book be found? Which authors can your work be likened to? In three sentences or less what’s your novel about?" Oy vey.
Posted by Unknown at 9:55 AM