Report from the Festival, Part 2 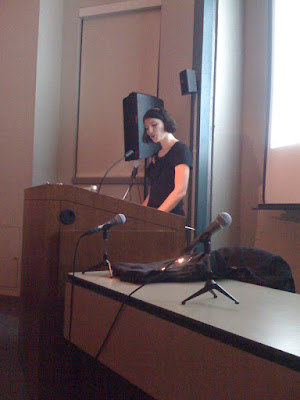 Jessica Savitz's reading at 8 PM in Meyer Auditorium is not only her Lake Forest College debut, but her debut period—she's never read her work in public before. It's a remarkably assured debut, in which the poems from her manuscript Hunting Is Painting ebb and flow together in a kind of continuous dream language, while images—family photos, the photos of a family friend who served in Vietnam, the work of a photographer named Roxane Hopper, and paintings by Allison Hawkins—flash by on the screen behind her: 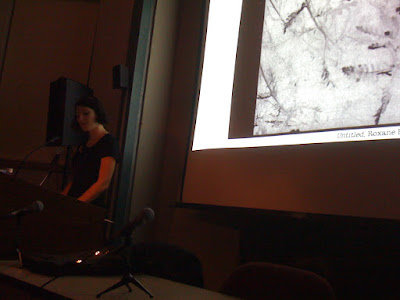 What I love about Jessica's poetry is how purely beautiful it is, while at the same time there are hints and peeps of the grotesque and violent shimmering between the lines, especially in the poems that deal directly with animals and the animalistic. I also like what the images do in the text, particularly the photographs, which are never simply illustrative but instead reframe the sometimes elliptical poems on the tense axis of personal history. I confess that when the manuscript arrived last year, I was put off by the largely amateur quality of the photos, but I've since been won over—I like the roughness, the collage-quality, they bring to the poems. A cautionary tale against letting some corrupt idea of "professionalism" prejudge my experience of poetry.

A morning of administrative tasks followed by an afternoon and evening of increasing poetic intensity. Three of the four Gnoets arrive on campus about an hour before showtime—they are Eric Elshtain, Matthias Regan, and John Tipton (absent was Jon Trowbridge, the Google engineer who actually wrote the Gnoetry software). Really lovely guys I'd recommend to any campus looking to shake some cages in the nicest possible way. After some technical difficulties they are able to demonstrate the Gnoetry machine in action. What is Gnoetry? Well, you can read about it at some length here, but the quick and dirty version is that the software uses an algorithim to analyze one or more texts (generally public domain stuff readily available on the web, ranging from the novels of Charles Dickens and the stories of Edgar Allan Poe to scripture and Eliza Poor Donner Houghton's firsthand account of the fate of the Donnner Party). It can then transform elements from those texts (and you can select what percentage of your poem that you want to draw from each source text) and create a formal poem: haiku, renga, blank verse, and other forms in which syllable-counting is involved.

The results can be eerily high in aesthetic quality: a poem extracted from Poe's "The Masque of the Red Death" is appropriately haunted and blood-splashed as it worked through phrases like "The scarlet horror" and the oddly terrifying ending phrase, "But the bolts." The audience of mostly students is mostly scandalized by the apparent vandalism to human ingenuity offered by machine-assisted poetry, but they show signs of being intrigued as well—one of my poetry students writes afterwards that while she felt that in some way Gnoetry was destructive to poetry, she also appreciated its democratic dimension—offering a potential path for non-poets to create poems. I wish the Gnoetry software was online, but there are apparently considerable technical difficulties; I imagine they'll manage it someday. 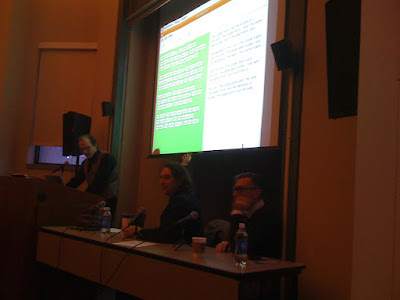 Three of the guys of Gnoetry—Eric Elshtain, Matthias Regan, and John Tipton—demonstrating the end of poetry as we know it. 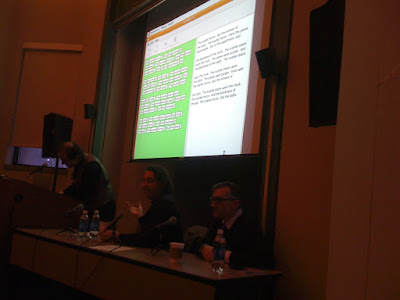 A slightly less blurry shot of Gnoetry in action.

After the Gnoets do their thing and a bite to eat at the dining hall, it's time for the main event: Christian Bök and the Lake Forest College Student Sound Cabaret. The Cabaret consists of eight Lake Forest students (Zachary Engel, Alexandra Fisher, Roland Davin, Max Glassburg, Will Stafford, Carl LaMark, Emily Capettini, and Nicole Nodi) who've been working with Christian for the last several days on a performance of Kurt Schwitters' "Ursonate," but they precede this with an "uncreative writing" demonstration: each has chosen a non-literary text to perform for one minute's duration. The results are pretty hilarious as the students perform a hysterical prologue to what I assume is an anti-abortion video; a caption from an art history textbook; the text from the back of somebody's State Farm insurance card; instructions on how to create methamphetamine "for informational purposes only"; and other bits of anti-literature.

I'm even more impressed by the performance of "Ursonate": after fewer than three days of rehearsal they've produced a tightly woven and integrated performance of complete nonsense that manages to be lyrical, funny, and dramatic by turns:

After the Cabaret sits down, Christian steps up to the microphone and does his thing. Photos and video can't capture the electric effect his performance has on an audience: this is the only poetry reading I can remember in which each poem is followed by spontaneous applause. He reads some of the dirtiest bits of Eunoia, sings an alien hymn that he wrote for Earth: Final Conflict, and performs anagrams and dadaist ditties. But what will stay with me the longest is the aria he performed from a Canadian avant-garde opera, The Princess of the Stars, written by R. Murray Schafer.


Christian Bök performs the Aria of the Three-Horned Enemy from R. Murray Schafer's opera The Princess of the Stars.

The opera is apparently staged on the shores of a Canadian lake at 4 in the morning. The audience sits on shore, while the performers are in large canoes on the water. Christian played the villain, the Three-Horned Enemy, a dragon-like monster that abducts the eponymous princess, which apparently takes the form of a gigantic (10-foot) puppet that Christian has to manipulate from his canoe while "singing." The Enemy's aria consists of a series of earsplitting shrieks, growls, and moans that rip through the audience like lightning-tipped spears; one young woman next to me flinches at every new torrent of sound. Sublime. 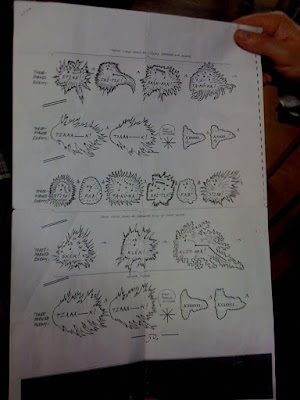 Part of the score for the Aria of the Three-Horned Enemy.
After the performance there's a reception with more guacamole than anyone can eat, and a remnant band of students plus myself, Christian, and creative writing instructor and playwright Lucas Krueger retire to Boomer's in the student center for a beer. Christian goes into more detail about his experience performing in the opera and fields the students' questions—pitched midway between incredulity and awe—with aplomb. A family man, I leave them to their 10:30 PM confab and drive home.
Posted by Unknown at 11:17 AM

My response to "Aria of the Three-Horned Enemy:" Anything that sounds like that is definitely my enemy.