I don't hear a lot of live music—I'm lucky to make it to the movies once a month or so with a 13-month-old—but on Friday night Emily and I were in the kitchen and heard Tony Sarabia on the radio talking about Juana Molina in such glowing terms that, in a thoroughly uncharacteristic moment of mutual spontaneity, we got online and ordered some tickets for her show on Sunday night at the Morse Theater and then lo and behold were able at the last minute to get friends to babysit so we could actually see the show.

Molina is astonishing. A former sit-com star from Argentina, she's been making intricately layered music as a solo artist for many years—Sarabia says for the first time she's touring with a band, though it consists of just two other people. She reminds me a bit of Theresa Andersson, whom you can see in this video doing a one-woman band routine a bit like Molina's, making use of digital looping to layer one sound atop another. Molina, though, makes much heavier usage of synthesizers, as well as natural and ambient sounds (her album Son, integrates birdsong and a fireworks show into the music); she used to be quite folky, but the music now has a harder and to me more interesting edge. Her new album, Un Dia, creates a vivid soundscape in which the lyricism of her voice struggles to harmonize with sounds I associate with the hyperintensity of the global urban mediascape. I hear elements that remind me of Laurie Anderson circa Big Science, Björk's more experimental pieces, and riffs from the darker side of Radiohead's moon. 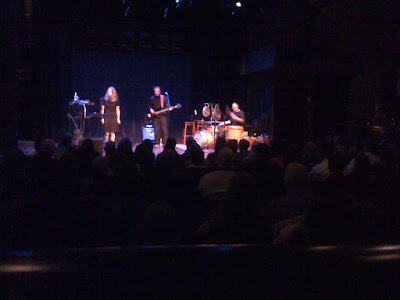 Semi-legible photo of Juana Molina and her band at the Morse Theater on Sunday, February 22, 2009.

Hearing her live was a sublime experience like I've rarely had a music show: the reason I rarely go to concerts is that I'm more of an earbuds kind of guy, and part of me has never understood the value of paying a lot of money to watch a bunch of people do not terribly visually interesting things on a stage while playing a rougher version of what they did in the studio. But Molina, ably backed by a slyly charismatic bass player and a drummer with a sunny vibe, was mesmerizing as she constructed the intricate loops of her songs. Again and again, she created a sound that was the whole foreground— the melody—only to succeed it with a new melody that harmonized with the old sound, now in the background, so that as each song went further and deeper it was like wandering in Baudelaire's forest of correspondences. It was an absolute triumph of pastiche, the form that excites me the most in music. And it makes me think about pastiche's role in poetry, as well.

Pastiche is practically a self-criticizing concept in the wake of Jameson's attack on it: a "blank parody" that produces sensation out of juxtaposing unlike discourses while detaching that act of collage from the political and historical energies that would give it meaning. This is the nutshell critique of post-Language poetry: that poets in their wake have adopted the disjunctive techniques of their predecessors while walking away from the ethical commitments that drove the LangPos to develop those techniques in the first place. The pop music equivalent is sampling, and if I were more knowledgeable about it I could probably draw distinctions between those artists who intend some kind of witty commentary by their appropriation of a riff originally belonging to Motown or acid rock or what have you and those who simply want a quick meaningless hit of the familiar to make their song more marketable. The big musical equivalent to the poetry example is probably the long history of the appropriation of African-American musical tropes by white artists; sampling just speeds up a process that began long before Elvis opened his first can of Brylcreem.

Molina seems a bit different. That may partly depend on my ignorance: I don't know anything about Latin American pop, and she may very well be appropriating and riffing on musical discourses that I just don't know about. But I don't think so: I believe instead that her juxtaposition of patently synthetic sounds with the music of the lyric subject (the voice, the acoustic guitar), and of course her crossbreeding of these (harmonizing with herself, rendering her own voice mechanical) turns a constructivist collage technique toward expressive ends that include the personal without being confined to it. That is, as with much postmodern poetry and music, I get the news of our/my condition from her music: I am transported to where I'm already standing, the half-virtual half-real circumstance of a citizen of the digital age, clapping his hands in the overloud dark.

How weird to come out of this ecstasy into the debased discourse that can produce something like David Orr's piece on poetic greatness in the most recent Sunday New York Times. Parts of it are valuable, like his indictment of "greatness" as a tone, "grand, sober, sweeping — unapologetically authoritative and often overtly rhetorical," a willed nationalistic somberness that reminds me of nothing so much as Yorick's suspicion of "gravity" ("a mysterious carriage of the body invented to cover the defects of the mind") in Tristram Shandy. But even as he attacks this notion of greatness he still longs for greatness as such, weirdly oblivious, among other things, to the masculinist presumptions behind such canon-making gestures (his discussion of Elizabeth Bishop is egregiously untheorized in this respect). It has something to do with his desire for more rigorous criticism: if we keep our eye on the greatness ball there will be less mediocrity, less log-rolling. But I'm not sure we can so easily separate "greatness" as a category from the pompous discourse that Orr tries to criticize but ends up entirely wrapped in, like a second-rate Superman's cape.

I recognize a little of myself in Orr's point about our veneration of non-American writers, whose greater political risks confer automatic laurels—isn't part of my fascination with Robert Bolaño based on his apparent greatness, even though the whole drive of his work deliberately dead-ends in the lethal cul-de-sac of literary greatness? But that's another post. Mostly I find Orr's focus on poets as vessels of "greatness" bizarre and unuseful. The music of Juana Molina remind me that what matters to me in art is an individual's multi-voicedness: heteroglossia without all the plot and other encumbrances of the novel being dragged along behind it. And this gets to another thing I love about Molina: she's a comedian, and there's humor, wit, and goofiness behind and beside the sublimity, which I probably would not have apprehended without seeing her live. She doesn't melodramatize herself and her music, but the music isn't "small"—it contains multitudes. That's what I'd like my poetry to be like: something supple and with real reach, and power without taking itself too seriously—without playing the game of self-canonization.
Posted by Unknown at 5:19 PM