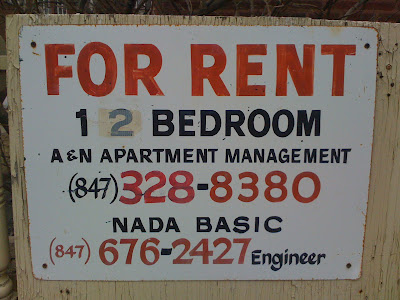 No, this blog isn't an entirely vacant space to let, though it can look that way these days. I only wanted to show you that incredible SF name: "Nada Basic, Engineer." An alias of the other Nada's, perhaps?

This past weekend Sadie met my sister, her Aunt Vanessa, for the first time: 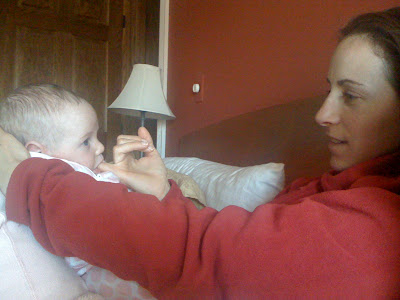 And Vanessa was quick to discover that from Sadie's perspective, we're all just human pacifiers: 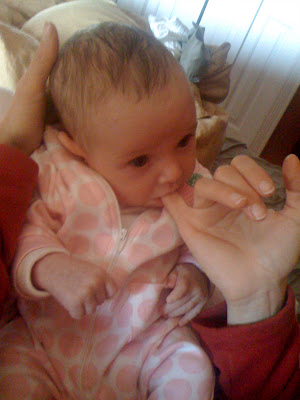 Out there in the poetry blogosphere people have been talking about all sorts of interesting stuff. There was an extensive and fascinating discussion of the aesthetics and sociology of poetry book covers, led by Kasey and Gary (that's the first entry; see Gary's archives for the rest). At Harriet, Reginald Shepherd has been poking the wasps' nest of avant-gardeners with a sharp stick once again as he talks suggestively about white male technophilia, and is responded to by, among others, Harriet's latest avant-garde blogger, Linh Dinh. "I’d say that the best avant-garde artists and writers are those who reflect their moment in history while simultaneously rebelling against it," Dinh says. "Only lackeys celebrate the status quo." 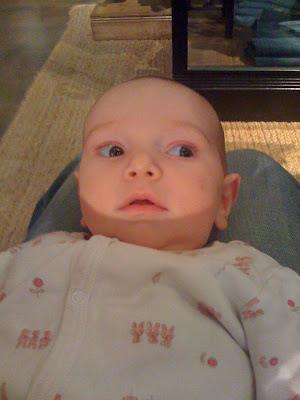 We might look askance at this last. Is "reflecting" one's moment in history necessarily a celebration of the status quo? Isn't "rebellion" at least as much a question of content as form (to say the, um, least)? I think most skilled poets both reflect their time and are critical of it; I'd rather reserve the category "avant-garde" for those with specifically formal modes of rebellion (I would include "social form" in this category, referring to alternative means of publication and distribution, happenings, heteronyms, et al).

Finished Moxley's The Middle Room, and I have mixed feelings about it. On the one hand, I gradually began to tire of the total immersion narrator Moxley insists upon into every moment and detail of her life preceding the moment she and Steve Evans moved to Providence, R.I., and got married. Though predisposed to admire the seriousness (leavened with some humor) with which Moxley takes her own becoming, I felt in myself arise a being similar to the "anti-Cupid" that constantly sabotages and undermines young Jennifer's romance with Steve, her noir dream. This spirit of anti- was staggered by the colossal self-indulgence the book, in all its length and with all its nineteenth-century sentences, seemed to represent. But ultimately I was moved by what I felt to be the core intertwined stories of a poet's finding creative community and of a child's separation from the (literary but also literal) body of her mother&#151both figures of outward. I felt intensely, personally involved in this story, not least because of details of my own biography; and when Jennifer's mother Jo passed away into wretchedness and then death, I wept.

Teaching, reading board books to baby, working on the Olson paper I'll be presenting in Brussels—time for blogging passes me by. But I shall not forsake it utterly.
Posted by Unknown at 9:47 AM