Not much left over. Can't resist the baby talk: we start out speaking normally but by the end of the sentence our inflections shoot way, way up, like those of teenage girls. 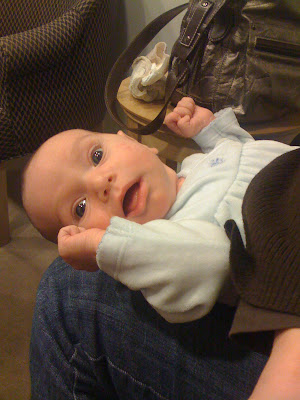 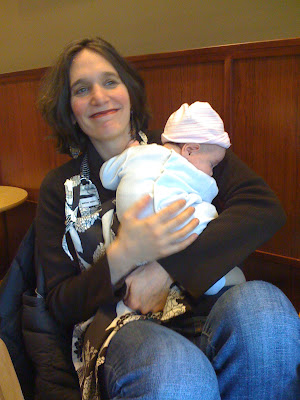 With Emily at Starbucks. 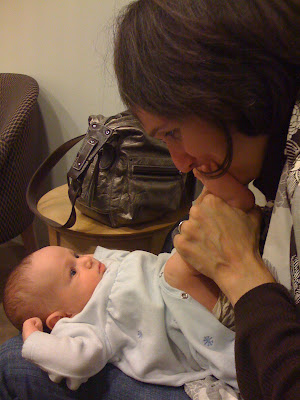 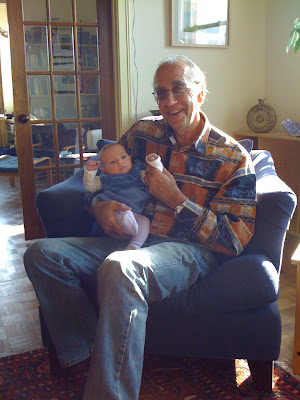 My father wants to be known as Sadie's "Poppy," but he may be changing his mind now that he knows our president calls his own father by that name.

Reading Silliman's Ketjak, pronounced keh-chak. A ketjak is a Balinese "monkey dance" intended to exorcize evil. It's a long poem in prose in which the same sentences and sentence fragments keep recurring in longer and more complex iterations as each paragraph swells to become much larger than all the preceding paragraphs. An anticipation, it seems, of Ron's employment of the Fibonoacci sequence in writing Tjanting (pronounced chanting, so he didn't move all that far from that idea). Written in the mid-seventies, it was his first demonstration of the New Sentence, something I'm actually more familiar with in practice from reading Lyn Hejinian's My Life. Reading it is like sitting down to listen to one of the jazz CDs—Thelonious Monk, say—that contain many tracks of variation on the same tune, so that your head nods at the return of a phrase, now freshly contextualized by the tide of new text that surrounds it. In that respect it's also like hitting the "refresh" button on the browser of a website that's constantly updated but which always retains some of the same basic elements.

I can see why it would have outraged and titillated and bored when it first appeared; I can see now why some would now find the technique to be uttery canonical, if not old hat&#151but I never lose sight of the fact that the majority of readers today would find the poem as strange and tedious as the readers of 1975 did. In that respect there is no advancement for art: the avant-garde is permanently avant-garde for everyone except the cognoscenti, the ones invested in expanding (shrinking?) the market for different modes of writing. Once you have your sea-legs, so to speak, there's pleasure aplenty to be found in a text like Ketjak, and very little of the Brechtian dissonance of the New Sentence comes off as dissonance, just as those Monk tunes no longer startle by their breaks and halts. The trouble is that few are interested in acquiring such sea-legs themselves: people are content with the pleasures they already know, for the most part, and don't wish to be seasick before they can stand. The only mechanism currently in place for growing the audience for such writing is the press gang of academia: I can assign Ketjak or a portion of it to my students and explain why it matters and a few of them, at least, will consider the possibility of its being a source of pleasure. But most will not pick up such a text again, I think, and we're back to the non-system of eccentrics' finding their misshapen way toward what they'll discover they need from poetry (bully for them). Perhaps that's best.

My copy of Jennifer Moxley's massive memoir The Middle Room has just arrived; The Irasicble Poet has whet my appetite for it. I'm hungry for a narrative of my generation's (very nearly—I think Jennifer's probably four or five years older) infatuation with and abandonment of and commitment to poetry. Why did we get here? How did we do it, or not do it? Has there been, shall there be, anything new?

Hungry again, in other words, for narrative: red meat. Telling my students this morning Eliot's line about meaning being the meat the burglar gives the guard-dog so that he can accomplish his work. What is that work? The poet as second-story man: he that tells us a second story. Let the first story languish; kick the ladder away.

From the back cover of The Middle Room:

There was a secret force deep in my psyche which, like a Cold War double agent, worked in tandem with my insecurity, a sort of wicked interior spy that emerged at the most inopportune moments to make sport of all my fears and fill me with crippling self-doubt as regards my natural fitness to live the life of the mind.

I feel almost entirely opposite: my wicked interior spy works to make me doubt my fitness to live the life of the body. Life, the life sentence.

Silence, then a lapse into speech, then silence. Rock-a-bye.

A movement, a lull. "Just keep walking," drive, he sd.

Driving.
Posted by Unknown at 2:36 PM