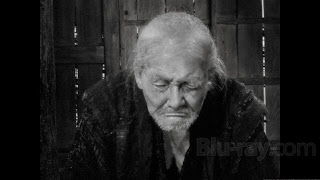 A writer, PhD student, and Iraq veteran named Roy Scranton has posted an astonishing essay, "Learning How to Die in the Anthropocene," in "The Stone" blog on The New York Times website. Astonishing not only for its content, which deftly synthesizes a lot of the thinking on the anthropocene familiar to latter-day ecocritical discourse, but for being placed so prominently in a mainstream media outlet. Most astonishing to me is its juxtaposition of the warrior ethos known as Bushidō in its construction of a new ecological ethics; specifically, the ethic outlined in Hagakure ("hidden leaves"), the 18th-century samurai manual written by Yamamoto Tsunetomo, which advises the samurai to gain "freedom" by living as though he were already dead. Scranton read Hagakure while deployed to Iraq, and it seems to have kept him sane:

Instead of fearing my end, I owned it. Every morning, after doing maintenance on my Humvee, I’d imagine getting blown up by an I.E.D., shot by a sniper, burned to death, run over by a tank, torn apart by dogs, captured and beheaded, and succumbing to dysentery. Then, before we rolled out through the gate, I’d tell myself that I didn’t need to worry, because I was already dead. The only thing that mattered was that I did my best to make sure everyone else came back alive. “If by setting one’s heart right every morning and evening, one is able to live as though his body were already dead,” wrote Tsunetomo, “he gains freedom in the Way.”

In a remarkable rhetorical coup, Scranton goes on to extrapolate from his situation as a soldier in Baghdad to our situation in the Anthropocene, confronting the precarious death-in-life of modern civilization, a reality glimpsed in the form of Katrina, of Sandy, of our collective inability to put a meaningful curb on the tons of carbon pumped into the atmosphere every second. Scranton writes: "The biggest problem we face is a philosophical one: understanding that this civilization is already dead. The sooner we confront this problem, and the sooner we realize there’s nothing we can do to save ourselves, the sooner we can get down to the hard work of adapting, with mortal humility, to our new reality."

This argument will be familiar to readers of Bill McKibben's Eaarth: Making a Life on a Tough New Planet. But it's the "already dead" thing that startles. The warrior ethic of Hagakure is feudal: it places the highest value on honorable service to one's lord, which depends on the vassal's subdual of the fear of death. It's a form of stoicism, of indifference to one's fate, coupled to the most lively imaginings of that fate ("shot by a sniper, burned to death, run over by a tank..."). Paradoxically, as suggested in the blockquote above, this stoic submission to fate, which is homeomorphic to submission to one's master, leads to "freedom in the Way" (Bushidō means "way of the warrior").

Now it may sound strange, but when I read Scranton's essay, I found myself wondering about the place of joy and ecstasy in an ethos appropriate to the Anthropocene. Why? Partly because the imagining of the body as dead, while the spirit is alive only to service, is a bit too Gnostic for my taste. It suggests that we must become zombies, re-enacting alien desires that we can't actually feel. It seems to me that our widespread denial of what's happening, our obsession with trivial digital glamour, our frenzied consumption, etc., is precisely a manifestation of a death-in-life characterized not by stoicism but acedia (the medieval monk's disease of indifference to his salvation).

More significant, I think, is the fact that if one truly imagines one's death, and the death of one's civilization (if not the death of humanity or the death of all life), does not life in the present take on the savor and intensity it otherwise lacks? Full presence in the here-and-now is not possible without the vivid imagination of the final boundary. I suppose I am simply reiterating what Heidegger calls "Being-toward-death" (a nice summary of which by Simon Critchley can be read here). There is a kind of ecstatic vitality that comes with confronting the reality of death, an appetite for presence and connection (with others, with one's own body, with ideas and traditions), in short, a meaningfulness that seems affectively if not substantively different from the stoicism of Hagakure.

In Kurosawa's Seven Samurai, a village is threatened with exploitation and destruction by bandits. The villagers resolve to hire masterless samurai for protection, but have nothing to offer except rice. "Find hungry samurai!" advises the village elder. "Even bears will come out of the forests when they're hungry." Most of the samurai recruited fit the Hagakure mold: the two leaders of the band seem certain that this adventure will result in their deaths, and proceed anyway. There is also a young and untried samurai named Katsushirō who at first seems more interested in flowers and the beautiful villager Shino than in thinking about death. He is in awe, however, of Kyūzō, who embodies more than any other member of the group the concept of living as though already dead. Stone-faced and laconic, he is the most terrifyingly effective of the assembled warriors, and Katsushirō crushes on him even harder than he does on Shino (who when he first meets her, is disguised as a boy; there's a lot of interesting homoeroticism in this film). 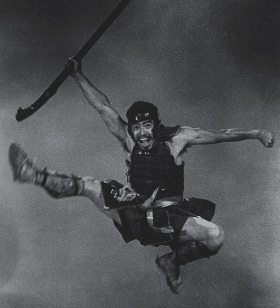 Then there's Toshiro Mifune's Kikuchiyo, whom as the viewer eventually learns is no samurai at all. He's a wild peasant dragging around an enormous sword, who identifies fully with the villagers and their precarious situation in a way the other characters do not. He is a vivid, earthy figure, full of laughter and rage, completely undisciplined, completely passionate, and in short as far from the sober ethos of Hagakure as one can imagine. But his commitment to life is large: he castigates the "real" samurai for not understanding the hardships of the farmers' lives, and he dies protecting them.

There's more than one way to be a samurai, in other words. There's more than one way to imagine death. It seems to me that more of us could stand to be like Kikuchiyo: conscious of our borrowed armor, attached to the earth, willing to die to defend the village from whose fate we do not separate ourselves. There is a fierce joy to be found in life on the precipice, not in stoicism but in something closer to a Nietzschean amor fati. We all must die; all must die. Let's be alive while we're here. Which means a commitment to the everyday, which means resisting domination and banditry with any and every means at our disposal.

I think this possibilty--this dark joy--is what's missing from Scranton's essay; and it's the resource we most need if the village is to stand any chance at all.
Posted by Unknown at 12:09 PM