My appetite for opinion waxes and wanes. In the years of graduate study, I was driven to test the strength and ductility of my own opinion—to try enthusiasms, as a plaintiff tries a cause. I thirsted, too, for others' opinion, most especially on poetic and political subjects. But that appetite has, for the moment, worn itself out and down to the nub.

"Watch this space." Not in expectation of novelty, but because the space exists and can, will, change. I keep some space for myself.

What's at hand: teaching, family, the occasional poem (itself occasional of a train ride, a black mood, news that's hard to swallow), novel-writing. I swim in this last like you swim in the ocean, parallel to the shore, suspended between painful shallows and unfathomable depths. I don't know what fiction is. I reach, swim, kick.

Reading. New books still come and some of them capture my attention. Last week, two very different books: from Coach House a work of what Rodrigo Toscano calls "the most realized conceptual-modular book of political poetry I've read to date," Rachel Zolf's Neighbour Procedure. A work of radical and rigorous empathy for Jew & Arab. One poem, "Grievable," consists entirely of a list of Arabic names. The final section, "L'éveil," is comprised of what the book's "Afterthought" calls "four remnants of an otherwise abandoned poem on Israel's thirty-three-day war in Lebanon that started July 12, 2006 and was my original awakening to this project." I should think that the "conceptual-modular" would be a node that would want to resist or subvert aestheticization of politics (and Zolf would seem to want this given a poem in another section titled "Anticipate (peut-être)" that asks if Walter Benjamin was "the first suicide / Bomber"), but I'm continually distracted by how physically beautiful the book is: its printing, and that gorgeously textured paper, like cotton, that Coach House always uses.

Is this an opinion? 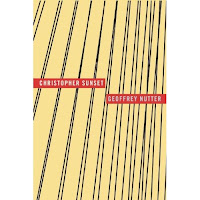 The other book is Geoffrey Nutter's latest from Wave Books, Christopher Sunset. His book A Summer Evening made a powerful impression on me for its old-fashioned limpidity and its deployment of a series of short poems (all ten lines, it's brother to Cort Day's The Chime, which also influenced my idea that a serial lyric could sustain a whole book) The poems here vary more in length but they still follow the law of the brief lyric, presenting moments of varied quality and making them beautiful by articulation and tongue-in-cheek ontology. I feel a kinship with this writing, its debts to Wallace Stevens and James Schuyler. It would seem antithetical to Rachel Zolf's political theater, but there are moments in which its investigations of slipped being interface with a recognizable world of wounded cities (New York hovers in the background but names are reserved for places like Teaneck).

But the crucial difference between Nutter's poetry and Zolf's, I think, has less to do with politics per se and more to do with solitude. Nutter's poems partake not of Quietude but of quiet: the speaker seems alone in a world of mutely significant objects, even when those objects have names (as in the very funny "Poem against Winthrop") or when the speaker's own family appears (but they appear as frozen images, as in the poem "Family Portrait "). Whereas Zolf's world is raucous, contested, its heteroglossia weighted both ethically and aesthetically.

And so I find myself tempted once again to re-enter the arena of opinion, which too often is the assertion of a dumb binarism: updating rather than critiquing a tired old dyad like School of Quietude vs. Post-Avant into monoglossia vs. heteroglossia, intuitive versus deductive, assertion versus document. Why play this game? Why not just let the poems be the poems? And permit myself to feel strongly drawn to both kinds of work, and to permit myself to range freely between those polarities in my own writing, rather than attempting any kind of synthesis or middle space or even any American Hybrid™?

So I beat on back into silence, figuring, letting words be words, deferring my own hot air.

"Why not just let the poems be the poems?" I'm not sure we just let anything be anything, because where's the fun in that? But I applaud your desire not to get stuck.