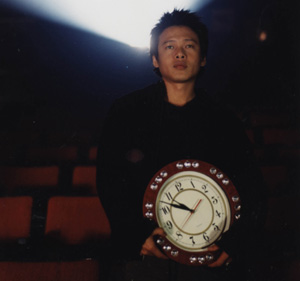 Ever since 2001 when it first came out and I read Elvis Mitchell's review, I've wanted to see Taiwanese director Tsai Ming-liang's film What Time Is It There? and last night I finally did. The plot is extremely simple: a man dies, and his wife and adult son are cut adrift from themselves and each other. The son, who sells watches on streetcorners, sells his own personal wristwatch to a young woman on her way to Paris; thereafter, the film intercuts between the lives of the son and mother and the young woman's alienated tour of Paris. The son becomes obsessed with Paris and specifically life lived on Parisian time, resetting every clock he encounters seven hours behind Taipei time. The mother obsesses over the possible reincarnation of her husband, shrouding their apartment in darkness so as not to "frighten" the father's spirit and making meals for him in the middle of the night. It's a slow film: one unsympathetic critic said it was like watching paint dry. The literature on Tsai confirms what the style of film suggests: a man in love with cinema, particularly what we might call its high European Modernist period—the Italian neorealism of the forties and the French Nouvelle Vague of the fifties. Not only does the male lead watch Truffaut's The Four Hundred Blows but the female lead actually ends up sharing a park bench with Jean-Pierre Leaud, the star of Truffaut's film. Sounds pretentious, no? But what drew me into the film was its adaptation of the estranging devices of modernism—in cinematic language that means medium shots held by a static camera, no music on the soundtrack, a cast of uncharismatic actors or non-actors (on the DVD Tsiang claims that Lee Kang-shen, who has been the Leaud figure to Tsiang's Truffaut in many films, is not really a professional actor, and that Lu Yi-ching, who plays his mother, keeps a coffee shop between films), and long, long takes—in the service of a kind of realism. Or to put it another way, if the conventions attending a Hollywood film are artifices of absorption, the static, painterly frames of Tsiang's film (but "painterly" isn't quite right, it suggests a degree of aestheticization belied by the banality of what most often holds his camera's attention) foreground their artifice so as to foster both a deeper and more superficial level of absorption in the viewer.

Watching Tsiang's isolated characters struggle for some sense of connection in the wake of the father's death (a moment that is beautifully and hauntingly elided in the opening scenes: first we spend several minutes watching the father sitting around in his Taipei apartment, then we cut to the son being driven in a car with—it took me several moments to realize this &#151a cannister containing his father's ashes in his lap), my eyes glided across the screen, noticing details of the composition (often one character is foregrounded and isolated from another character in the same frame but in the background, in deep focus), while the characters do things like wait for trains, eat, lie in bed, go to the bathroom, or watch TV. Yet these details have a curious cumulative power. In the final scenes, the young tourist, Chen Shiang-Chyi, has failed at making a sexual connection with another Taiwanese woman she met in a cafe (simultaneously with similarly frustrated connections on the part of the other characters—Lu masturbates while a photo of her dead husband stares at us, and Lee has sex with a prostitute who later steals his case of watches). She lies asleep in a chair by a pond while some youths make off with her suitcase. In the next shot, while she is still sleeping, the suitcase floats across the pond from left to right. Then we see a well-dressed gentleman standing nearby who retrieves the suitcase from the pond with his umbrella and sets it back upright near, but not too near, Chen. When he turns we recognize the figure of the dead father. In the last shot he is standing with a Ferris wheel behind him in the distance: he lights a cigarette and walks off toward it, bearing more than a passing resemblance to Chaplin, as the clocklike Ferris wheel slowly begins to turn. I was moved nearly to tears by this unexpected and silent resurrection: the effect was not unlike what I feel reading The Winter's Tale when Hermione comes back to life at the end.