"If a hamster is lapping syrup it will be seized with a hamster clamp." 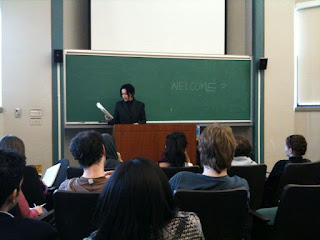 Vanessa Place performs.
The above is probably my favorite line to have so far emerged from the 2010 Lake Forest Literary Festival, which concludes today. It's the translation of a Hungarian tongue-twister featured in a story that Shelley Jackson read last night that was absolutely crammed with tongue-twisters in various languages in a bravura, hyperJoycean performance. It's been thrilling and a bit daunting to be confronted by such a high-powered group of experimental writers, each of whom pushes and punishes every boundary she encounters.

The festival officially began on Tuesday with a panel discussion moderated by me and featuring Jackson, Vanessa Place, Teresa Carmody, Lily Hoang, and our current Plonsker resident, Gretchen Henderson. I didn't know any of them except for Gretchen, and it's kind of a strange way to meet someone: to interrogate them, en masse, before a live audience. Here's my list of questions, not all of which I got to ask:
I won't attempt to reproduce the panel's answers to these questions: it probably more fun and more conceptual to go read their work, then imagine what each of them might say. Vanessa Place got in most of the good one-liners: I remember her saying something like, "You have the right to speak provided that you're always interrogating." Later, when she was visiting my poetry-writing class, one of my students called attention to a line from La Medusa: "Me, the Maladictine monk." Instead of a Benedictine who literally "speaks good" and leads the faithful to Christ, the narrator of that text speaks evil and leads the reader astray. And that's her ethics: to "lose" the reader and leave her to find her way "back" or "out" or "through" again. I think of what Emily Dickinson said about her father: that he read "lonely & rigorous books." If you can be lonely amidst the infernal cacophony of voices in La Medusa, which I'm only just beginning to explore, and which brings to its phantasmagoric investigation of Los Angeles Place's direct experience of the infernal as a lawyer who brings appeals on the behalf of indigent sex offenders, as well as her imaginative experience of historical evil, manifested in the small excerpt of text I've read through grimly (un)funny jokes about the Holocaust and lynching.

In her reading yesterday afternoon she achieved a coup de theatre by following up a very funny piece--an exhaustive catalog of names and nicknames for female genitalia--with the raw transcript of testimony from her work, a sad and sickening story told in the uninflected language of the law of an alleged rapist (Place's client, for whom "every woman was a 'bitch'") and his alleged victim, a prostitute who died of a drug overdose shortly after the apellant's preliminary hearing. Other conceptual projects that Place presented including her "whitewash" of Margaret Mitchell's Gone with the Wind: her "reading" consisted of about five minutes of silence, concluded by the last words of the novel: "after all, tomorrow is another day." The overall project, as I understand it, erases every word of Mitchell's novel except for direct references to the black characters, most especially the word "nigger." I am braced and a little terrified by Place and her work: she seems utterly unadorned by sentiment, and completely radical in her pursuit of an ethics/aesthetics (she disputes the distinction) of mere presentation and the reader's self-implication. I am most naturally drawn to Dies, which is a 50,000-word sentence that all apparently takes place in the mind of a soldier during World War I: it's beautifully written and lushly printed (by Les Figues) and, probably for this reader, at a safer emotional distance than the work which engages so unflinchingly with the persistence of evil and the "not-okay" (a phrase that after Place takes on much darker inflections than those suggested by flarf's invocation of those words). 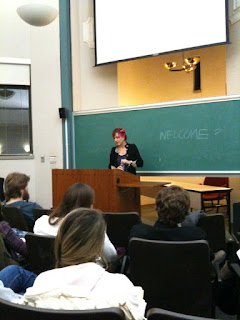 Shelley "Action" Jackson.
The confrontation with Place's work will be, I think, the most lasting legacy for me of this conference. I enjoyed the readings by Lily Hoang and Teresa Carmody on Tuesday night, but the purest pleasure has come from Shelley Jackson's Wednesday evening reading of the aforementioned tongue-twister story, plus a couple of shorter narratives which derive all of their words from the front page of The New York Times. The procedure here is a little like that used to create Kenneth Goldsmith's DAY (but not at all resembling the technique behind Kent Johnson's DAY), only instead of simply appropriating and monumentalizing the paper she's scavenging it for narrative purposes that inevitably manifest her own interests and obsessions (Tristan Tzara on cut-ups: "The poem will resemble you"). That is, the ambiguous identity of the (female) body as oozing, borderless object: she has a lot of fun with blobs, goo, tentacles, and other substances that I most often associate with the visual work of Cronenberg and Matthew Barney and Richard Serra.

It's the sheer linguistic exuberance that will send me back to Jackson's writing (I am about a hundred pages in to her wonderful satirical novel Half Life, about an alternate reality in which Twofers--people with two heads--take on the allegorical and literal burden of queerness and difference, responding--as real queer people do--with "Pride." It's funny as hell). I will also be reading her hypertext novel Patchwork Girl, and perhaps putting it on the syllabus of a course on Frankenstein for first-year students that I'll be teaching this fall. But I was most inspired, oddly, by the list of authors that she said she was teaching this spring: Beckett, Bruno Schulz, Clarice Lispector among them. It reminded me that there is a doorway for me into this kind of narrative work, and that I don't have to feel "outside" of either fiction in general (which I too often do, thinking of it as poetry's Other) or of the coterie of experimental fiction.

Today at noon we'll hear from Vanessa Place once more, this time on a nonfiction book that she's publishing entitled The Guilt Project: Rape, Morality, and the Law which Random House is bringing out this month. At 4 PM Angela Jackson and S.L. Wisenberg (author of the appealingly titled memoir The Adventures of Cancer Bitch) will read, and the festival will conclude with Gretchen's performance of her Plonsker-award winning book, Gallerie de Difformité. If you're in Chicago, it's not too late to catch the train here.
Posted by Unknown at 11:28 AM

Fab account, Josh. Wish I had been there. Place is so dynamic. Lucky students.