Something to write and not writing it at the other blog.
Posted by Unknown at 10:37 PM No comments: 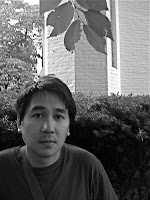