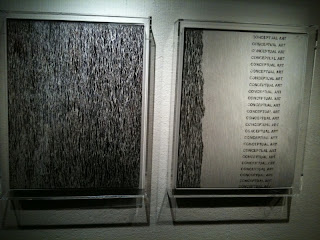 The maw that rends without tearing, the maggoty claw that serves you, what, my baby buttercup, prunes stewed softly in their own juices or a good slap in the face, there's no accounting for history in any event, even such a one as this one, O, we're knee-deep in this one, you and me, we're practically puppets, making all sorts of fingers dance above us, what do you say, shall we give it another whirl, we can go naked, I suppose, there's nothing to stop us and everything points in that direction, do you think there will be much music later and of what variety, we've that, at least, now that there's nothing left...
—Vanessa Place, from Dies: A Sentence

Some ideas are logical in conception and illogical perceptually.
—Kenneth Goldsmith, "Paragraphs on Conceptual Writing"

Conceptual narrative necessarily marked by digression, omission, despair, the ecstatic uprising of the sentence against the tyranny of paragraphs ("A sentence is not emotional a paragraph is," G. Stein), chapters, plot and character. Writing that does not find a readership but which inaugurates a thinkership. Is it correct, then, to speak of the pleasures of the conceptual text?
To review: R. Barthes: the readerly text produces pleasure in part by not challenging the reader's role as consumer of subjectivity, by presenting an unbroken sequence of events for digestion. The writerly text produces bliss/jouissance by challenging/cruising the reader to re-interpret the signs, to be attentive to the materiality of language, which perversely exceeds or falls short of any and every narrative object. These are categories analogous to those of innocence versus experience, and thus dependent on each other. Further, as Blake knew, the proper path is not from one to the other, but to circle back again, to pass through experience and back again to innocence, but innocence-with-a-difference (only after such knowledge, forgiveness). So every and any text is both readerly and writerly, though texts which present themselves as writerly are much rarer than the other kind and are marked today as experimental/innovative/postmodern/difficult/hybrid/unnamed/unnameable.

It would be simple, then, to say that conceptual writing is writerly writing and to have done with it. As Barthes says in the first pages of S/Z, "the goal of literary work (of literature as work) is to make the reader no longer a consumer, but a producer of the text" (4). This would seem to jibe with three sentences from Kenneth Goldsmith's "Paragraphs on Conceptual Writing": "Marketplace fiction and forms of 'purposeful' writing are of completely opposite natures. The former is concerned with making a text with a specific function. Fiction, for example, whether it is a work of art or not, must be utilitarian or else fail completely. Conceptual writing is not utilitarian." (Notice how we might reiterate a Romantic formula there if we replaced the phrase "conceptual writing" with "art" or "the artwork.") But is the "plural text" (6) that Barthes writes about really less utilitarian than a "classic text," such as the Balzac story he winds S/Z around? If anything, it's more utilitarian in that it provides employment for literary critics and the academic-industrial complex. Put another way, to enlist the reader as "producer" seems worlds apart from the playful expenditure that seems to characterize divers conceptual texts, from "pure" conceptual pieces like Day and Traffic to the baroque foliations of La Medusa and Dives to those mixed or "impure" conceptual/noulipian pieces that ring changes on the Shakespearean sonnet (Jen Bervin's Nets, Paul Hoover's Sonnet 56.)
Goldsmith's conceptual-perceptual binary indexes the continuum between pure, impure, and baroque that Place & Fitterman map out in Notes on Conceptualisms. But I find "pure" and "impure" unhelpful labels in determining the nature of the pleasure(s) to be obtained from conceptual writing, broadly speaking. "Baroque," on the other hand, is a term I've long associated with a form of writing that I experience as deeply pleasurable, one which exploits the tension that Goldsmith identifies in the penultimate of his "Paragraphs":

Writing of any kind is a physical fact. The physicality is its most obvious and expressive content. Conceptual writing is made to engage the mind of the reader rather than her ear or emotions. The physicality of the work can become a contradiction to its non-emotive intent. Rhyme, meter, texture, and enjambment only emphasize the physical aspects of the work. Anything that calls attention to and interests the reader in this physicality is a deterrent to our understanding of the idea and is used as an expressive device. The conceptual writer would want to ameliorate this emphasis on materiality as much as possible or to use it in a paradoxical way (to convert it into an idea). This kind of writing, then, should be stated with the greatest economy of means. Ideas may be stated with numbers or words or any way the author chooses, the form being unimportant.

Place & Fitterman claim that conceptual writing is a mode of allegory. The baroque takes the age-old tension between mind and body, spirit and pleasure, as its formal principle, and thus becomes a double-voiced, heteroglossic tale that refuses to dissolve the physical pleasures of the ear and eye or the no-less-physical because fundamentally temporal pleasures of narrative for the sake of its idea, even as it insists on its concept and the possibility of a key to the text's mythologies. This already true in the history of "straight" allegory—look at how Redcrosse, the allegorical knight of "Holiness" in Book I of The Faerie Queene, completely and consistently behaves in all-too-human ways. After all, if he started out "Holy" and finished up that way, there'd be no story at all. Which is why Redcrosse's slaughter of the monstrous Errour takes place at the beginning of his tale, instead of ending it.
The canonical Modernist example of the baroque has to be Ulysses, which is based on various conceptual procedures from micro-procedures like the history of the English language that characterizes the narration of "Oxen of the Sun" to the book's macro-mapping of its chapters onto the Odyssey (a mapping that, notably, depends on the extra-textual commentary that Joyce built into the "Ulysses experience" by enlisting ephebes like Stuart Gilbert, so that for ever after we would refer confidently to "Oxen of the Sun" and other such chapter titles that don't actually appear in the book). But you'd have to be blind and deaf to let Joyce's conceptual apparatus drown out the pleasures provided by the musicality of the sentences and the unfolding of the narrative, or to force Bloom into one or another conceptual category (as Jew, Other, cuckold, father, artist, bourgeois, etc., etc.) and not enjoy the considerable pleasures of his company.
During her visit to Lake Forest Vanessa Place said several times that many of her works are designed to excite the question, What is this?, or more precisely, What is poetry? What is narrative? And her most purely conceptual works (such as her self-appropriation "Statement of Facts" or her darkly witty Gone with the Wind) are royal roads to those questions. But I am more attracted to her baroque writings, which exceed their correlative objects but are nonetheless objects (Place would probably prefer "sites"), sensuous and seductive and excessive as all hell. They are, to return to Barthes, texts of pleasure and of bliss. You think them, but thinking is just the beginning of experiencing; you produce them and are surfeited at the same time.
My thinking on these points is bound to circle back to poetry eventually. And it will also guide, or thwart, progress on Miramare, which to paraphrase Robert Frost, of all people, now like a piece of ice (its concept) on a hot stove (materiality, narrative) rides on its own melting (toward the dissolution, or solution, of both).
Posted by Unknown at 3:52 PM