Revising Severance Songs in Ithaca where they were written, confronting the melancholy gap between the poems and "The Poems," what I'd hoped they'd be. What I wanted: a living document of active perceptions, of my senses—moral, aesthetic, erotic—pricked and stung by events in a time of withdrawal from a darkening world, my time in Ithaca (August 2001 – August 2007). What I've got: a bunch of poems that perhaps sustain a dialogue among themselves, perhaps only chatter and hum. They conceal more than they reveal. But I've tried to follow Berryman's dictum: "hide the pieces, where they may be found."

Reading in Oppen, finding traces in what I've written, what I hoped to write, what stance this book wants to take. From the third part of Daybook II, the first "Pipe-Stem Daybook": “art and political action are in precise opposition in this regard: that it can always be quite easily shown that political action is going to be valuable; it is difficult to ever prove that political action has been valuable. Whereas art is precisely the opposite case.” And: “art lacks in political action, not action. One does what he is most moved to do” (89). (The italics, according to editor Stephen Cope, indicate handwriting.)

So: the pastoral withdrawal enacted, at times rejected and re-ensued, by the book, a form of action. And if not a politics, not at least an evasion of politics.

These poems began as sonnets: not rhymed, but definitely fourteeners, definitely black rectangular boxes in which bullets of syntax ricochet. Now in revision I am ventilating the boxes, creating stanza breaks, adding spacing. And trying to place them in alignment so that some portion of content gets passed from hand to hand.

Oppen, "A Letter": "[T]here are 'accents' which are WRONG. We, the poets, change the accents, change the spech. We change the speech because we are not explaining, agitating, convincing: we do not write what we already knew before we wrote the poem" (44).

Revision, re-vision, is not then, should not be explication, forcing, and it's my fear of doing this that has kept me from doing more than shuffle the order. But I take a firmer hand now trusting that the book does have a syntax that wants to emerge, and that this syntax knows what I do not yet know. Writing writ large? It's far more difficult than simply writing, generating, which is itself only easy when you're doing it.

Oppen's pastoral, in the essay "The Mind's Own Place": Flowers stand for simple and undefined human happiness and are frequently mentioned in all political circles.... But the good life, the thing wanted for itself, the aesthetic, will be defined outside of anybody's politics, or defined wrongly" (36).

The poems move from bewilderment to wildness. Oppen quotes Duncan on the same page: "I mean, of course, that happiness itself is a forest in which we are bewildered, turn wild, or dwell like Robin Hood, outlawed and at home." From wildness toward a vision of the lineaments of gratified desire. Berryman again: "There ought
to be a law against Henry. / —Mr Bones: there is." What is that law? Who wrote it?

Revising in 2008. I believe we are awakening from a long nightmare and into responsibility, which may be more terrible than a nightmare. For the world, long past withdrawing from, may also be past our healing. At the Poetic Ecologies conference, speaking of the time of peak oil and the end of cheap energy, Andrew McMurray said, “The world is about to get a lot bigger.” That may, in the end, be our best hope. And yet we will still want to speak to each other, face to face, whenever we can—we must. Our capacity for empathy must grow in direct proportion to the shrinking grip of our technology. Are we brave enough to be that vulnerable? Are even poets brave enough?

Oppen's "Statement on Poetics": "[T]here are things we believe or want to believe or think we believe that will not substantiate themselves in the concrete materials of the poem." And: "Prosody is a language, but it is a language that tests itself. Or it tests itself in music--I think one may say that. It tests the relations of things: it carries the sequence of disclosure." And: "actualness is prosody." And: "it is certainly possible to mock poetry just as there are times when one is sick of himself" (49). The man could say a lot on a single page.

Revision, then, is a test of these poems. And a test of this poet, who's too often relied on fluency. (Daybook II:I: "The word is the burden, the words are the burden, of the line which it must bear ^lift^ up into meaning" [69].) But as Oppen also says, Heideggerianly, "Those who merely chatter await an interruption that will save them from themselves" (49-50).

Here is Ithaca, no longer home. Unless one can be at home in an interruption. From "Twenty-Six Fragments":

6.
I am not sure whether or not
I would like to live altogether
In the forest of poetry
Its mystery and its clarity

I feel he is leading me through my own poems, Virgil-like, though there's nothing particularly Oppen-esque or Objectivist about these poems. They are, rather, small specimens of postmodern baroque. But when I've read all the daybooks I feel somehow I'll understand better what I'm trying to achieve. And then maybe these poems will find their home. 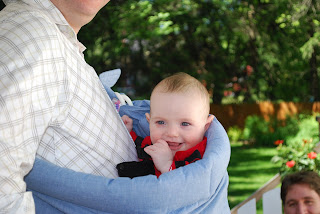 Sadie is the wildcard, a genuine interruption (but Oppen's notes lend themselves nicely to the fragmentary reading sessions that parenthood demands). A new view, a string to string beads upon. It can't be the same book it was, thank goodness.

Cavafy: "Ithaca gave you the marvelous journey. / Without her you wouldn't have set out."

Hoping she still has something to give me.
Posted by Unknown at 4:30 PM