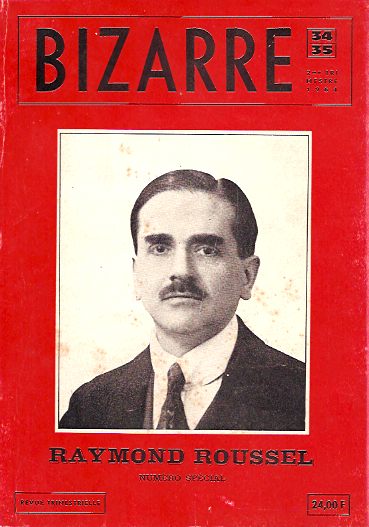 Two upcoming events to alert you to:
The Dust of Suns by Raymond Roussel

French poet, novelist and playwright Raymond Roussel (1877-1933) faced almost universal incomprehension and derision during his lifetime for works that neglected traditional character and plot development in favor of the construction of elaborate descriptions and anecdotes based on hidden wordplay. While the premieres of his self-financed plays caused near-riots, admirers included Surrealists Andre Breton and Robert Desnos. who called The Dust of Suns (1926) “another incursion into the unknown which you alone are exploring.” Roussel never enjoyed the posthumous fame of his hero Jules Verne, but he has exercised a powerful fascination upon later writers including the French Oulipo group, John Ashbery, Michel Foucault and Michael Palmer. New editions of his novels and poetry are forthcoming this year from Princeton and Dalkey Archive.

Like much of Roussel’s writing, The Dust of Suns has a colonial setting. Against the backdrop of fin-de-siecle French Guiana, a convoluted treasure hunt unfolds. The Frenchman Blache seeks his uncle’s inheritance, a cache of gems whose location lies at the end of a chain of clues that includes a sonnet engraved on a skull and the recollections of an albino shepherdess. Meanwhile, his daughter Solange is in love with Jacques—but all Jacques knows of his parentage is a mysterious tattoo on his shoulder…

ALL PERFORMANCES ARE FREE.
******************
On Saturday, March 12 at 7 PM, please come to The Book Cellar in Lincoln Square for a launch party for my new book Severance Songs. A celebration of the sonnet, my reading from the new book will be interwoven by readings of new and classic sonnets by a cavalcade of Chicago poets: Chris Green, Simone Muench, Tony Trigilio, Jennifer Karmin, Ray Bianchi, Kristy Odelius, Robert Archambeau, Larry Sawyer, Davis Schneiderman, and Joel Craig.

As its name suggests, the Book Cellar is both a terrific independent bookstore and a vendor of fine beers and wines, so it's sure to be a rocking time. The address is 4736-38 Lincoln Avenue and the phone number is 773.293.2665. Hope to see you there!
Posted by Unknown at 3:38 PM