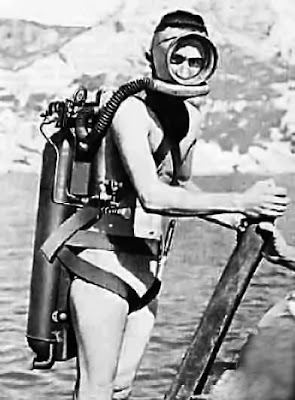 What it comes down to - my extravagant claim that "only poetry can counter the Big Lie of power" - is the peculiar status of poetry's medium, words. They are not material, though they have the material properties of sound, appearance, and history. Nor are they wholly conceptual or transparent vehicles for reference. This is what makes it possible for poetry to do more than describe--to go beyond the judicious study of the reality-based community. Poetry creates connections in language with the potential to restructure perception and to stimulate new thinking. If the language of empire is lethally performative--turning the disaster in the Gulf into an interesting technical problem with its own anesthetizing vocabulary ("top kill," "junk shot," "relief well"), or the Gaza flotilla raid into "military acts of defense"--poetic language performs deterritorialization, creating new configurations which invite thought, perception, realization.
Marcella Durand puts it more eloquently than I do at the conclusion of her essay "The Ecology of Poetry," found in the anthology I am currently devouring, Brenda Iijima's eco language reader:

Most other disciplines, such as biology, oceanography, mathematics are usually obliged to separate their data and observations into discrete topics. You're not really supposed to link your findings about sea birds nesting on a remote Arctic island with the drought in the West. But as a poet, you certainly can. And you can do it in a way that journalists can't—you can do it in a way that is concentrated, that alters perception, that permanently alters language or a linguistic structure. Because poets work in a medium that not only is in itself an art, but an art that interacts with the exterior world—with things, events, systems—and through this multidimensional aspect of poetry, poets can be an essential catalyst for increased perception, and increased change. (124)

Durand claims for poetry the territory that my Lake Forest colleague Glenn Adelson calls "hard interdisciplinarity": the blending and blurring of interdisciplinary lines of study and knowledge-production in a rigorous and demanding way. At the same time, poetry is itself a discipline, preoccupied as Durand says with "systems" made up in language:

Experimental ecological poets are concerned with the links between words and sentences, stanzas, paragraphs,, and how these systems link with energy and matter—that is, the exterior world. And to return to the idea of equality of value, such equalization of subject/object-object/subject frees up the poet's specialized abilities to associate. Association, juxtaposition, and metaphor are tools that the poet can use to address larger systems. (123)

It's not a coincidence that Durand's claims for poetry, which are nearly as extravagant as my own, are linked with ecology, which is or ought to be the interdisciplinary discipline of our time. Poetry and ecology fit well together because both investigate systems and systematicity without themselves being systems, using specialized tools that are neither wholly empirical/material nor wholly theoretical/conceptual.
But ecology, like poetry, has a problem: in spite of its interdisciplinary character, it's still, well, hard. And the ecological narrative seems to have all but foundered in recent years, as persuasively argued in a controversial article, "The Death of Environmentalism," available for perusal at Grist.org. Ecology and environmentalism have not persuaded the mass of people of the essential truth of interconnectedness; they have not undone the poisonous, fundamentally pastoral narrative of "nature" as something outside of and separate from us. Whether you see "nature" as something to be exploited, managed, or protected, that implicitly hierarchical structure of separation is the crumbling pillar that upholds our entire technological civilization. The myths of the wilderness and the garden, then, are just as limiting and destructive to the new thought we need as the countervailing narrative that makes ecology (literally, "home knowledge," oikos logos) a sideshow to economy ("home management").
The title of this post refers to another Jethro Tull song; I'm not interested in the lyrics this time (about a dirty old man leering at schoolgirls) but the old-fashioned name for an oxygen tank for underwater exploration, which makes it possible for creatures of air and land to experience another element. A modern aqualung is a rebreather, which Wikipedia tells us is a more efficient and economical form of breathing equipment that recycles the user's own breath while adding oxygen to the mix; this creates less "noise" in that the user generates few bubbles, which on the one hand is less disruptive to marine life and permits closer observation, and on the other hand is useful to military commandos because it allows them to approach the enemy undetected.
Poetry, then, is a kind of aqualung or rebreather, recycling available words and discourses while adding something new and potentially life-giving to the mix. It enables the ecological thinking that we so desperately need now. It makes, in spite of postmodernism, the rediscovery of depths possible. And, I maintain, it's this kind of thinking with/through/to "things as they exist" (Zukofsky, "An Objective") that can counter the discourses of power.

****************
The dark coincidence of my turn to Leslie Scalapino and her recent passing has not escaped me. I'm saddened that my rediscovery of her work must take place without her actually being and writing in the world.
Posted by Unknown at 9:31 AM

I like the way you think of what poetry might be able to do. But it's the "only" in "only poetry" that drives me crazy, J. I mean, visual art can't do this? Journalism can't be compressed and thought-provoking or line-of-flight-inducing? Music's no good here? Conversation?

Of course, one could redefine poesis as "the only thing that can undo the big lie," but tautology is tautology, as they say in the academy...

Maybe it's me. I tend to get skittish when I hear claims to the effect of "that thing I do? it's the most important thing!" Coming from bankers, farmers, doctors, priests, or poets -- if the claim is for pre-eminence, rather than interdependence, I just sort of get itchy.

I'm sad about Scalapino, too. Glad she got a mention.

related to your concluding note, there is a 40-or so second video of Scalapino at Charles Bernstein's blog that is deeply poignant, its last words very moving. Scroll down a bit and you will find it.