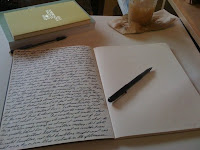 The verse diary experiment is over, for now. I intended to write every day that I was in Ithaca, and I more or less succeeded. The diary did not quite coincide with the entire month of June because the last two days were devoted to travel: those days then, by definition, are in excess of, are binding upon, the project as an Ithaca project.

It is interesting and unsurprising, or perhaps surprising but uninteresting, that overall readership was down while I was posting only verse. I am not unsympathetic: I have trouble reading poetry on the Web, especially the kind of poetry I was doing (uninterrupted verse blocks in rough tetrameter that require the reader to scroll downward seemingly interminably). Web poems are optimally viewed complete on a single screen. To my knowledge an intuitive technology replicating that crucial bit of kinetic-sensory information provided by the paper book or magazine—the fingertips' knowledge of how much longer a poem or section or chapter or book is—has yet to be discovered.

As far as the novel goes (I spoke of it in verse, but to speak of it here in prose feels finally and ultimately disclosive) I seem to have entered a new phase in its composition. The first 50,000 words were written on my computer, but for the past week I've been writing in longhand in a notebook. The sensory pleasure of this is muted but persistent. I recently switched notebooks, as well: the roughly 4 x 8 Moleskine with ruled pages that I've been slowly filling for the past two years (since well before Sadie was born) has been replaced with a much larger and thinner notebook, also a Moleskine, without lines, so that to open it up is to behold a vast clean field (but not too clean: the paper is less white than the old notebook, it has a buff sort of tone that provides a bit of pleasing resistance or texture for the eye to catch hold of). Writing without lines, on broad pages, with a black fine point Pilot roller ball pen, I feel the prose moving ineffably toward the condition of poetry, not so much in its content (for there are still characters, actions, voices, and all the other trappings of narrative) but in process, its dreamlike unfolding, one word or sentence suggesting the next.

Intoxicated mornings like this morning, sitting in mixed sunshine outside the Bros. K coffeehouse, my hand swimming across and down the page, a nearly pure experience. Just to write, to go on writing, is enough. The project, the product, seems incidental to that experience.

When I can't write any more I read Badiou (or, strictly speaking, about Badiou: I had to retreat from Being and Event to Peter Hallward's introduction, Badiou: A Subject to Truth. But I've ordered two books I'm told I'll find more congenial to my purposes: The Century and Handbook of Inasethetics). Through the fantasia of mathematics as ontology he promises to deliver us from postmodernism and theory and endless heuristics toward Truth. I am skeptical but compelled. The chapter on Badiou's aesthetics (or inaesthetics) is very suggestive, and I've been musing over the polarity he sets up between Mallarmé (the poet of pure subtraction, whose objects become pure language and form, and whose subject, the speaker, disappears) and Rimbaud or more intriguingly Pessoa (the poet of substitution [I am tempted in Pessoa's case to say multiplication]), who proliferates objects but subjects them to a rigorous syntax (such as, I think, procedural poetry, Oulipian games) and of course multiplies and so disperses the subject (Je est en autre, or Senhores Caeiro, Reis and de Campos).

It is tempting to analogize or homologize this polarity to the conceptualism/baroque (flarf) polarity set up by Rob Fitterman and Vanessa Place in Notes on Conceptualisms. The goal of both poetics, as articulated by Place-Fitterman, is the defeat of mastery, which I take to be very similar to Badiou's desire to defeat the count-as-one. "Subtracted from all habitual familiarity, a poem leaves everyone equally confounded. Without concern for the conventional requirement of language users, poetry affirms the pure 'sovereignty of language' [Petit manuel d'inésthétique 161]" (Hallward 198). This is not a new idea—it is fundamentally a Mallarméan idea. And I see a direct line from the "pure 'sovereignty of language'" of Mallarmé to the austerities of conceptual writing, in which the object is diminished in the name of the word, and the word-object is diminished in the name of the concept. But I'm more interested, and more temperamentally suited (as a writer, though perhaps not as a thinker), to the possibilities of the baroque, and what seems to be Badiou's way of thinking about the possibilities of substitution and the plural as means of pushing the poem toward its necessary and heroic failures (its escapes, its lines of flight from conventional, prepackaged, commodified experience). This also veers a bit from Badiou's emphasis on purity, which I find, quite frankly, to be creepy.