Report from the Festival 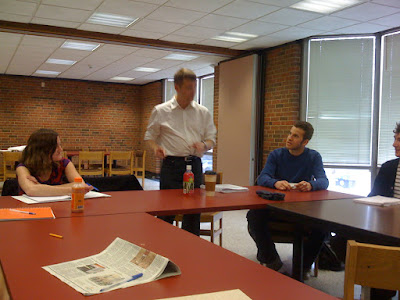 I pick up Christian from the airport and take him to the college. We discuss Canadian politics, the rise of Michael Ignatieff, and the general absence of charismatic personages in both the political and poetry worlds in Canada at the moment. We pick up Stephanie Strickland at Glen Rowan House on the campus and go for dinner to Casa de Isaac in Highwood&#151a great little Mexican place owned by Orthodox Jews, so the place is closed on Shabbat. I am chagrined to realize the place has no liquor license, but we still enjoy our food. Stop off for a drink at the rather stuffy Southgate Cafe in Lake Forest, where Christian dazzles us with the complexity of his drink order, though it seems to amount to a dry martini with a slice of cucumber instead of an olive or twist of lemon.

Tucked into a corner of the bar I mostly bear witness to an animated debate between Stephanie and Christian about the role that myth might play in reconfiguring our culture's ability to understand reality (with a special emphasis on ecology) in terms that aren't stranded by the personal, the experiential, our very grammar's tendency to reduce our understanding of the world to the action of individual agents upon individual objects. Christian rejects myth as something dangerous that's already been tried; Stephanie is more pragmatic and thinks we need to hook into existing structures of feeling (my phrase, or rather Raymond Williams' phrase, not hers). Their disagreement seems to center on whether myth can be non-religious or not: Stephanie seems to say it can, Christian seems to say it can't. I lean in Stephanie's direction, but am unhappy with her example of Buddhism as a philosophical framework that gets us away from subject-object (or I-It, I suppose to adapt Martin Buber) thinking. If we really want to be pragmatic about getting people to imagine the mess we're in, and the sheer complexity of the systems that obtain, we're going to have to work with material more or less indigenous to North American culture. But maybe I'm being too narrow.

One drink's all I have time for, as a family man, but we nevertheless manage to close the place down at 9 PM. Lake Forest nightlife ain't much. I drop them off at the guest house and drive home.

Christian is met for breakfast by four student volunteers, one of whom wrote me afterward to report that Bök blew his mind. Well, that's why he's here. Then he goes off to visit music professor Don Meyer's senior seminar with apparently similar results. I spend the morning dealing with administrative details, then meet up with Stephanie for lunch at our surprisingly good dining hall (I think "surprisingly good" ought to be part of its name. I had stir fry). Afterward we do an a/v check in the auditorium where Stephanie and and our Plonsker writer-in-residence Jessica Savitz will each do their things on Tuesday: Jessica's incorporating some striking photos and images into her reading, while Stephanie of course is a full-fledged multimedia poet (evidence here).

More administration, then I walk over to Glen Rowan to pick up Christian to take him to the first meeting of the Sound Cabaret Workshop he's leading as Artist-in-Residence. I stick around to see how it goes; the workshop turns out to be a lively rehearsal of an excerpt from Kurt Schwitters' "Ursonate," to be performed chorus-style by the students in the workshop. They take surprisingly and immediately well to shouting things like Fümms bö wö tää zää Uu and rakete bee bee? rakete bee zee. (I think here of Khlebnikov's definition of Zaum as "words in no known language that nonetheless have something to say.") If language is a virus, nonsense may be one of its most infective forms. They'll perform their piece before a hopefully large audience on Wednesday evening.

After the workshop we meet Stephanie and Jessica for dinner in the dining hall (pesto chicken pizza with bacon on top, just because) along with English/Theater prof Richard Pettengill, who's having the indefagitable Christian to visit his evening class afterward. Jessica and I opt to attend the Lake Forest College Writing Club's reading, which is alas poorly attended, but the readers get off some good things. I'm pleased to see that the univocalic constraint I gave my poetry students has infected some club members who are not in the class, and marvel as always at how restricting yourself to one vowel invariably produces lively, surprising, pleasure-inducing poems.

Home in time to see the latest Bachelor deny one of four identical females a rose.

Meet up with Stephanie and Christian to take them to my morning poetry writing class, in which they each give short presentations and take questions. Christian has ten simple rules for writing better poems, which I'll print here:

1. Use only concrete, physical nouns.
2. Choose the most specific possible nouns: "convertible" or "Mercedes," not "car."
3. Verbs must be active. Avoid "to be" like it was Ebola.
4. Make the subject of the verb do something that subject doesn't normally do. Not "the chainsaw cuts" or even "the chainsaw shreds" (a student-suggested improvement) but "the chainsaw stencils the silence" (Al Purdy).
5. No adjectives!
6. But if you must use an adjective, it should not normally apply to the noun it modifies.
7. No adverbs!
8. But if you must use an adverb, it should modify its verb in a surprising or incongruous way.
9. Never compare anything to anything else (i.e., death to similes—no "like" or "as"). Juxtapose directly.
10. The things you juxtapose should be wildly unlike each other. Not "The moon, a face" but cummings' "the moon rattles like a piece of angry candy." Yes, that breaks the simile rule.

These are very fine rules, I think, though there must always be exceptions. It will be interesting to hear from those students who resist this constructivist approach to poetry. Stephanie followed up with her own list, this time the eleven rules or principles of electronic literature, or elit. They're part of an essay of hers on the subject that's about to appear over at the Poetry Foundation, so just keep checking there for it. I can remember a couple of them: the first is elegant in its simplicity: "If you can print it out, it's not elit." She got everyone thinking, I believe, about how writing is and must change in a digital age. In a sense, the books we read are digital imitations of books: electronically typeset rather than letter-pressed, a reproduction of the product of older technology. The illusion of the "page" produced by a word processor such as Word similarly demonstrates how chained we continue to be to a past era of information. Stephanie's point about this is not that books should or will disappear, but rather that we have yet to develop an electronic literature that fits its medium; her point of comparison is the early days of TV, in which all the programs resembled filmed plays. It took decades for television to evolve forms of storytelling that make maximum use of its particular resources while minimizing or eliminating remnants of the theatrical (though it seems, with the advent of wide-screen television, to have moved much closer to cinema in recent years). 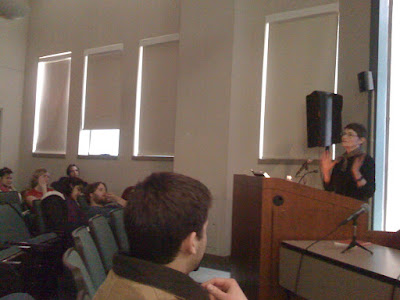 Stephanie Strickland takes questions after her presentation of hypermedia poems on Tuesday afternoon.
After the class and a quick lunch, in which we are joined by by my colleague Davis Schneiderman, it's time for Stephanie's noon performance/demonstration. Attendance is solid and my feeling is that the audience was impressed and interested in the digital poems she shared with us: Vniverse, The Ballad of Sand and Harry Soot, slippingglimpse, and Errand upon Which We Came (all viewable at her website, though some of the pieces, like Vniverse, can only be viewed on a PC). Most fascinating to me was her explanation of how slippingglimpse uses the movements of water—images captured from the Maine coast—to synchronize the movements of words and phrases from the poem. As she puts it, the water "reads" the poems in this way, creating a dialogue between human and nonhuman languages; there's also a dialogue or dialectic in the ways in which the stylized configuration of the phrases and their overlappings and movement can lead one to read the image and watch the text. Stephanie and Christian are both skeptical, I think, of my notion of postmodern pastoral (which I talked to them a bit about), and of "nature poetry" in general; but I think I could make some interesting hay with slippingglimpse's staging of what Strickland calls "coreading."