Wrist very painful this morning from flipping and flopping on it in bed; nevertheless, I'm convinced it's only strained. From the Lake Forest train station I stop in at Walgreens and pay $8 for a black elastic brace for my wrist with "ACE" on the side in red letters. Pretty tough: 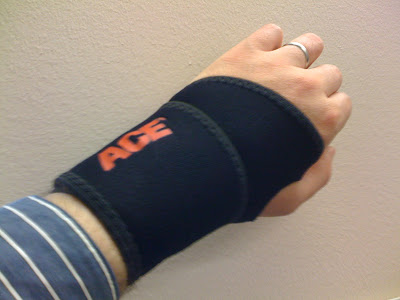 Spent the day meeting with students and pondering the reading list for my fall "Modern Poetry" seminar. I end up choosing to focus on American poetry and place an order with the bookstore for the following titles:

As you can see, it's a list heavy on the modernist classics that shifts gears rather awkwardly at midcentury and winds up with three recent books. I'm already rethinking some of them: the Pound that matters to me is more the Cantos Pound than the translations/Hugh Selwyn Mauberley Pound, so I might just throw the Selected Cantos at them or even Sieburth's edition of the Pisan Cantos, which has excellent notes. Black modernists are perhaps underrepresented--I'd love to teach Tolson's Harlem Gallery. Wondering too if they oughtnt to read Plath's Ariel, which must be one of the most influential books ever written. And I'm obviously infatuated with Gabe's Rhode Island Notebook and see it as a kind of quixotic recasting of the Poundian epic impulse--but it's very long, possibly too long to give to students at the end of the semester, even if I selected excerpts for them.

When I arrive at Links Hall for the 8 PM rehearsal (having miraculously found a parking space on the same block in spite of the Cubs game), the others have already put in a lot of work: Fred, Melissa, and Rodrigo have been rehearsing the pieces I don't appear in in a grimy space on Ravenswood Ave. I go across the street to get coffee with Melissa, who reveals that this kind of performance pushes her out of her comfort zone, "but that's probably a good thing." My own sense of comfort may evaporate once I'm snorting and writhing in front of a live audience, but for now it's sustained by the fact that I am merely Rodrigo's instrument--these are not my words, though they are my gestures, my pronunciations.

Rodrigo expresses concern when he sees my wrist brace and orders me to lay off of moving heavy things for the time being, but it's really feeling much better after a day's partial immobilization. Tonight is largely a technical rehearsal, with Rodrigo and Rachel going over the placement of lights while the rest of us take our positions and only murmur our lines so as to provide cues. Acting is boring: there's a lot of hurry-up-and-wait, innumerable stray moments in which you might go to the bathroom or check your voicemail, but mustn't engage in sustained distraction because your director might call upon you at any moment. Still, it's fun to be part of something larger than yourself, even if it's only a little bit larger. Though there's been little opportunity for the five of us to get to know each other as people, a certain camaraderie has taken hold. We all want this to succeed, though it's not yet clear to me what success for a poet's theater will look like. Rodrigo's not chasing laughs, though there are a lot of funny bits in his pieces. Nor do we want that "poetry sigh" that characterizes the humid atmosphere of most poetry readings.

The best part of the evening comes when John and I get to sit and watch a full run-through of "Spine," a piece in which neither of us appear. The hard work Melissa and Fred have put in shows, and they take command of the space and their roles very convincingly. Fred especially has a kind of edgy charisma when he's on stage: the audience's eyes will follow him. Rodrigo is the third player; I can never forget that he's the author and director, and wonder if the audience will feel the same way. I won't say much about the piece itself except that it seems to be a kind of allegory of labor and the experience of alienation from the fruits of one's labor. It would be fascinating to follow these poetic threads into Rodrigo's other work, which is of course similarly preoccupied with labor in the economic sphere.

Rodrigo lets me go a bit early after we've got the lighting down for "Pig Angels of the Americlypse," the longest piece in which I have a part. Tomorrow's the long dress rehearsal, starting at 6 PM and ending who knows when. I get home in time to say goodnight to Emily and Sadie, then ice my wrist for a bit. I feel that I'm on the mend.
Posted by Unknown at 10:49 AM